Showing that age is just a number when it comes to game development, a 14-year-old virtual reality fan has released their first project on Steam, called VRHome. The ‘game’ gives you a powerful system for customising your virtual space, helping you build a detailed virtual home, or place to hang out, complete with screens, whiteboards, guns and much more.

Virtual chat rooms and hangouts are becoming rather popular in virtual reality. Whether you’re talking about longstanding, event hosting software like AltSpaceVR, or the recently released VRChat – they are all aiming to replicate something similar to the personalised gunter hang-outs in Ready Player One. VR Home does something similar, but for now at least, is only single player.

Multiplayer functionality is coming down the pipeline though, as well as additional furniture, compatibility with game emulators and custom model importing – but there is still plenty within the game already. You can use a wide variety of objects and furniture to build customised rooms with streaming TVs, functioning laptops, use in-game cameras and guns, play physical games like pool, or load in game boy games via the compatible emulator.

You can also stream radio and MP3s, or launch Steam games directly from your digital room.

Scaling is also rather fun, letting you build a home and then shrink it down within another, creating an interactive doll-house experience.

Reviews of the game on Steam have so far been mixed. While the developer has received praise for his achievement at such a tender age, some have highlighted difficulties with controls and tutorials. That sort of ease of use understanding is something that comes with experience and will no doubt improve over time. The developer has already posted that the experience should be easier to understand moving forward thanks to new tutorials and better instructions.

KitGuruSays: Congrats to the developer. The most I was able to achieve at his age was a couple of barely functioning levels within Unreal Editor 2. 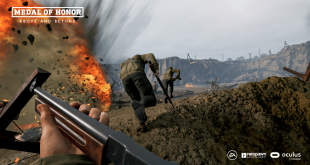