A wireless HTC Vive prototype could show up this year

One of the big problems Virtual Reality headset builders are currently trying to tackle is the sheer amount of cables involved. This is especially important for room-scale devices like the HTC Vive, which wants wearers to be moving around a room, rather than staying in one place. However, it looks like HTC/Valve may be close to tackling this already, as reports claim that a wireless Vive prototype is going to show up this Autumn.

Apparently Valve and Quark VR have been joining forces to put together a wireless HTC Vive prototype that could be revealed for the first time this year. According to Quark, they have managed to develop a small device that can hook up to the Vive, a transmitter can then be placed in the user’s pocket, which will send and receive signals from the PC over WiFi. 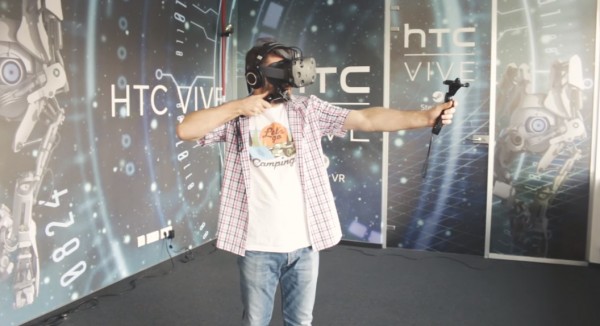 One of the big issues so far has been reducing the connection delay, but Quark feels that they have almost narrowed it down to a point where a wireless Vive prototype could be shown off in public for the first time: “Getting the experience to feel seamless through Wi-Fi, keeping in mind the inevitable connection delay, was a huge challenge, but we’re getting extremely close to being able to show it in action!”

So perhaps we will end up with a wireless HTC Vive this time next year, eliminating the fear of tripping on a cable mid-game.

KitGuru Says: As an Oculus Rift owner myself, I haven’t found the cable to be too distracting but then again, most of the Rift’s games are seated. With the Vive and its room-scale tech, it makes perfect sense to invest in a wireless solution, after all, nobody wants to be worrying about tripping on their cable while walking around in a virtual world.