At the Computex 2014 trade-show Intel Corp. announced that its reference designs based on the Skylake generation of microprocessors will support Rezence, a wireless charging standard developed by the Alliance 4 Wireless Power (A4WP). This week Intel actually licensed wireless charging solutions for computing devices designed by WiTricity.

The A4WP’s Rezence near-field resonant technology has a lot of advantages compared to other wireless charging technologies based on induction. Rezence allows to charge devices with up to 50W power requirements though other materials (e.g., wood, plastic) and provides simultaneous charging of multiple devices with different power requirements. The technology further offers ‘spatial freedom’ for additional reach in the z-direction, eliminating the hassle of accurate coil alignment – all on a single charging surface or in a charging region.

The agreement between Intel and WiTricity will allow the chip giant to integrate the latter’s implementation of the Rezence battery-charging into its reference designs, which will then be used by its partners to develop their products. It is unknown whether the actual makers of Intel-based based PCs, 2-in-1s, tablets and smartphones will also have to buy separate licenses, or those expenses will be somehow covered by Intel. 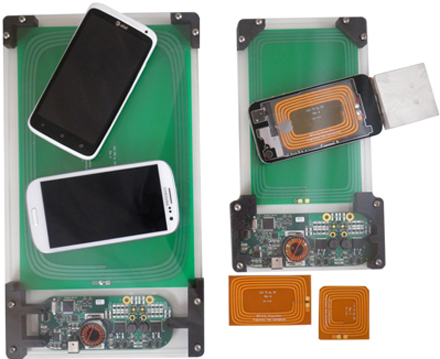 The decision to license the actual physical implementation of the Rezence battery-charging technology underlines the importance of wireless charging for Intel. The company will most probably incorporate Rezence into as many designs as possible, which will have a direct influence on the market.

Without a strong rival on the market of personal computers and powerful 2-in-1s, Intel has one simple reason to incorporate wireless charging into Skylake-based offerings: to provide those devices a strong advantage compared to the previous-generation products. In case the company will somehow help its partners to implement wireless charging and maybe provide incentives for integration of the technology, the demand for new gadgets will increase and so will sales of Intel’s chips, such as Atom, Core M or Core i families.

“We have overwhelming feedback from end users that they are frustrated with dealing with all the different wires and power adapters for their devices – phones, tablets & PCs,” said Sanjay Vora, vice president and general manager of user experience at Intel. “At Intel, we have a vision to eliminate all wires from all of our platforms. This agreement is a major step in the right direction enabling our companies to work together to deliver the next generation of devices that eliminate the need for power cords.”

KitGuru Says: Without any doubts, wireless charging brings a lot of advantages to mobile devices. The only question is how much will such technology cost to the end-user initially?