For this test, we ran the Aorus 15 X9 through Fire Strike, Fire Strike Ultra, Time Spy and Port Royal which is the new benchmark specifically for ray tracing. In the graphs below you can see it compared against similar laptops. Even though they all have similar specifications, slight variations in boost clock speeds caused by fluctuations in temperature have an impact on performance. 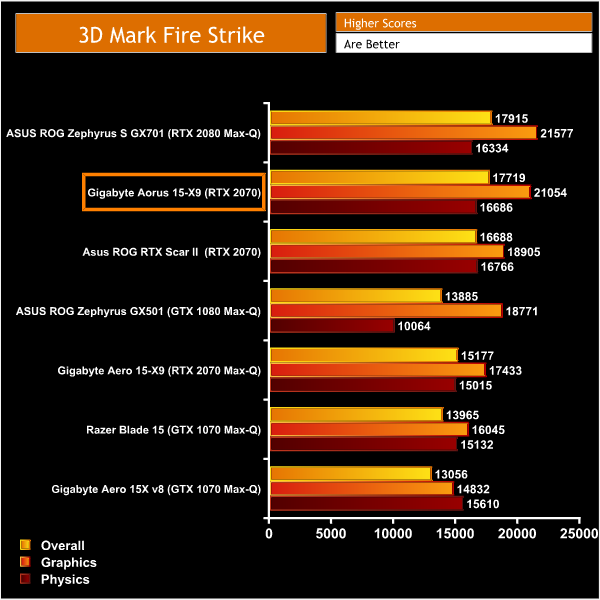 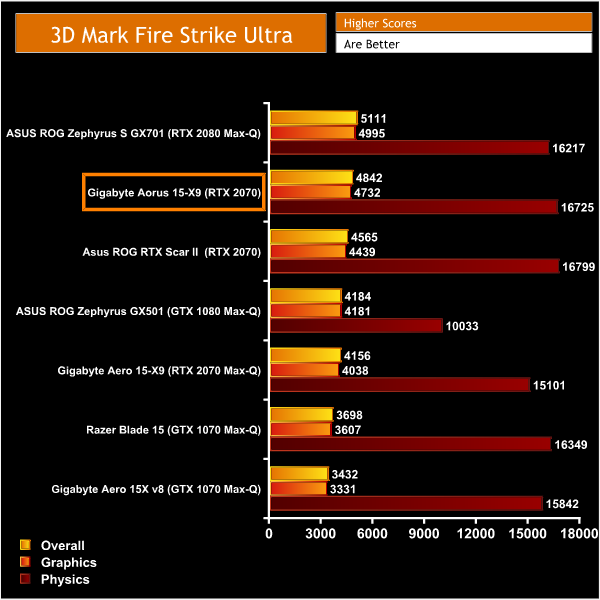 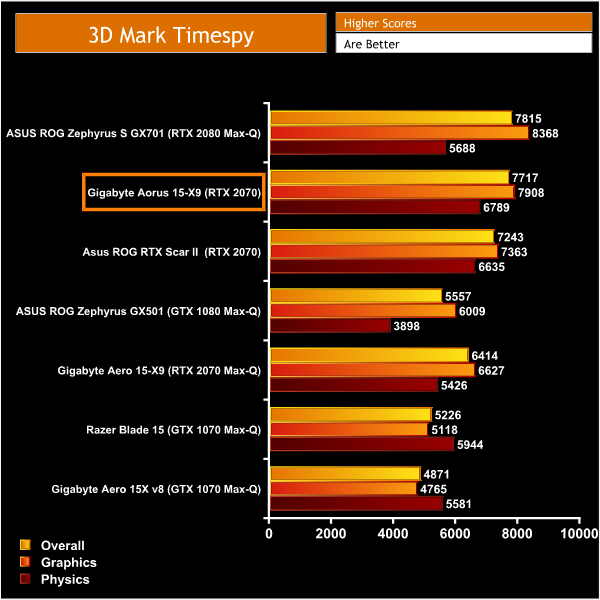 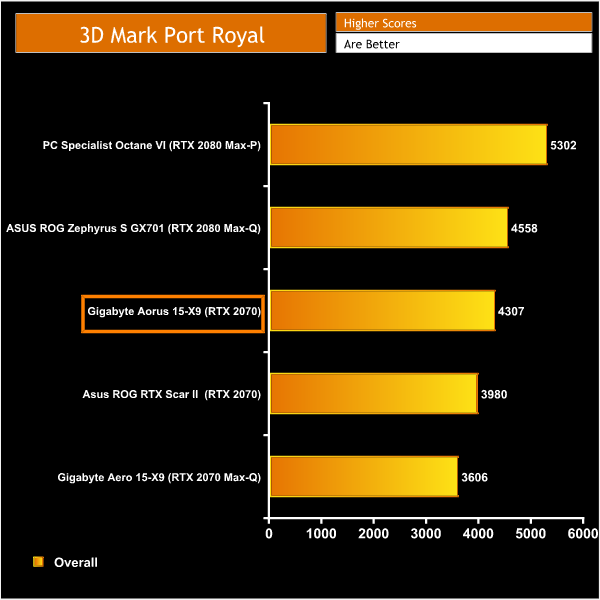 The 3DMark scores from this laptop are very impressive and show it to be a highly capable machine. The RTX 2070 boosts to a high clock speed of 1680MHz and beats out the similarly specced ASUS ROG Strix Scar II in all of the benchmarks. The Physics and CPU scores are equally impressive, as we have come to expect from the I7 8750H.

The Aorus 15 X9 obtained some of the highest scores amongst all the laptops we tested featuring the same CPU. Overall the 3D Mark scores show this laptop will be suitable for playing demanding games and undertaking taxing productivity tasks.

We used the Aorus 15 X9 to play 3 different popular and graphically demanding games. We tested the games at their highest graphical settings with DX12 turned on where possible and AA disabled. We then compared our findings to other laptops we have tested.

Rise of the Tomb Raider is an action adventure game with many different environments and immersive landscapes making it a useful way to test this laptop’s gaming performance. We tested on Very high settings with AA disabled. 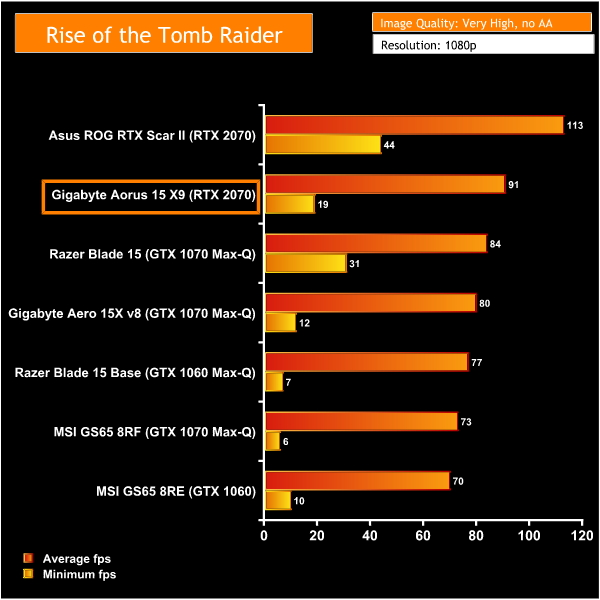 Far Cry 5 was released on March 27, 2018. The gigantic open world of Hope County has plenty of beautiful scenery to test how well this laptop performs with a newer game. We tested on the Ultra preset with AA and motion blur disabled. 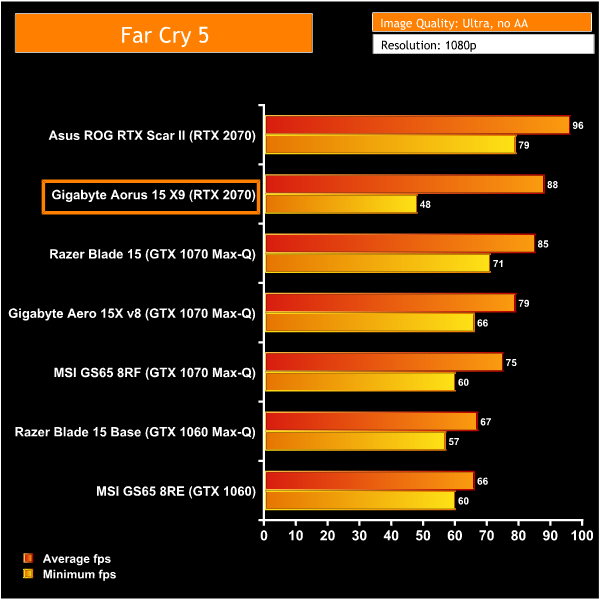 Tom Clancy’s Ghost Recon Wildlands is a game with a superb open world environment. The beautiful scenery of mountains, forests and deserts requires a lot of GPU power to render, particularly on high settings. This demanding game is perfect for testing this laptops gaming performance. We tested on very high settings with AA disabled. 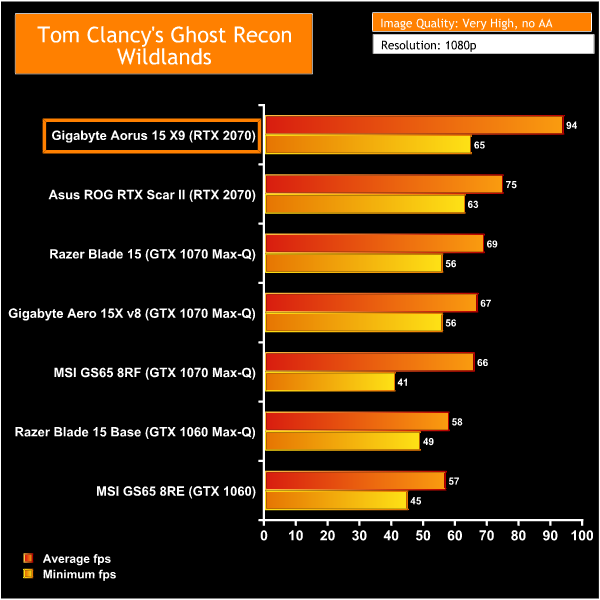 Shadow of the Tomb Raider: Is the most recent release on our line up of tester games and supports Nvidia’s RTX technology. We tested the game at several different preset graphical settings with DLSS & DX12 turned on. We then also tested the same graphical settings again with RTX turned on and ray traced shadow quality set to high. 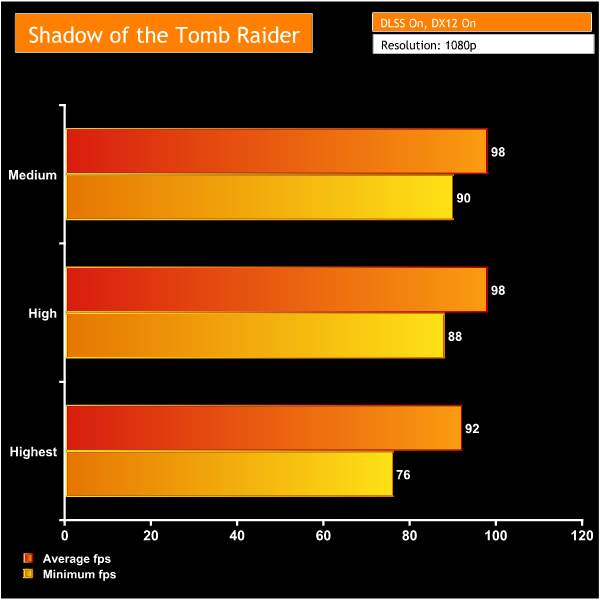 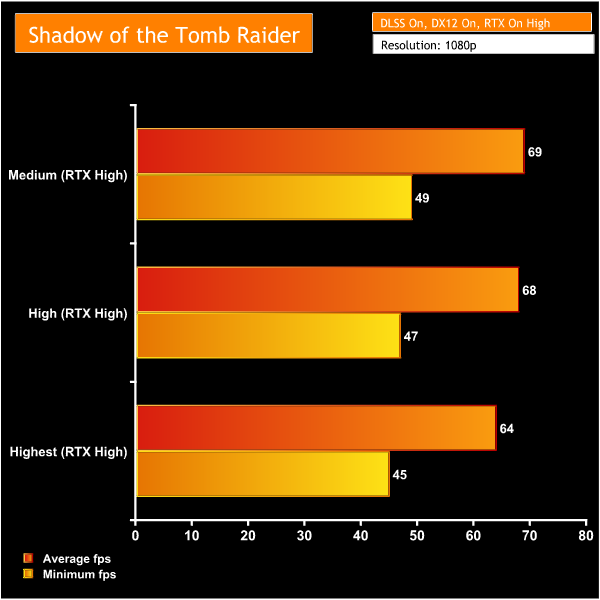 The results from the game testing show the Aorus 15 X9 to be a very capable laptop when it comes to gaming. It can play demanding AAA games at very high settings with a high frame rate that makes the 144Hz display worthwhile.

Despite beating the ROG RTX Scar II in all of the 3DMark benchmarks, it does lag slightly behind in some of the games but does beat it out in others. There is a noticeable increase in frame rates over the previous Nvidia 10-series laptops as expected, but it isn’t a huge leap.

However, having RTX in a laptop is a nice option for gamers that want to make the most of the new games that feature ray tracing capabilities. Our Shadow of the Tomb Raider benchmarks certainly show this laptop to be powerful even when faced with High RTX and graphics settings.