Lenovo and Razer partner up for new gaming desktops

Razer first revealed its intention to break in to the desktop gaming PC market at CES 2014, with its modular PC concept. However, that project didn't quite pan out and has since been dropped. Now, Razer is doing something a little more traditional, by partnering up with Lenovo to bring out a range of ‘Razer Edition' gaming PCs.

These new desktops aren't quite ready to launch yet, though we will be seeing more at CES in January. Right now, details on exact specifications are thin, though we can see a pair of Nvidia GPUs in the press images, which will likely be paired with an Intel Skylake CPU, or we could potentially be looking at an X99-based PC. 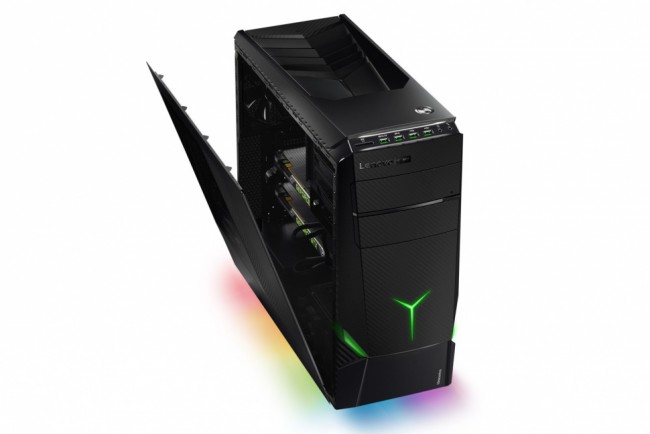 The case is really the highlight to take away here. While Razer has dabbled in desktop chassis before, in partnership with NZXT, this case is a bit more custom, with RGB lights found dotted around the place, which will likely be capable of syncing up with Razer's Chroma product line.

Hopefully when CES rolls around in early January, we will learn more about specifications, along with pricing and availability.

KitGuru Says: Razer has always had a knack for nailing the ‘gamer' style with its products. I do wonder how well Razer branded pre-built gaming desktops will do though. What do you guys think of Razer? Would you buy a Razer desktop PC?