Steam just released their Hardware Survey for April 2010 – with 26 million accounts being used as a basis for reference it is probably the most accurate system we currently have for analysing hardware trends. Valve are not resting on their laurels and have recently adopted Direct X 11 graphics cards into the survey and are also going to be bringing Mac OSX figures into the results – with the imminent release of Steam for the Mac platform.

With the release of Steam for OSX, Apple gamers have finally got access to one of the most heavily funded gaming platforms on the market – it will be interesting to see over the coming months how widely it is adopted and it could genuinely be the 2010 ‘kick start' Apple need …. quite how Steve Jobs and the gang will react however is still open for debate long term. There seems to be a certain misplaced smugness amongst Apple executives that their audience really don't care for gaming and I think quite the opposite is true.

The report also shows the huge adoption of Windows 7 amongst the gaming community with almost 40% of all steam users moving to Microsoft's latest operating system. While this isn't entirely surprising – the fact that almost 26% are using the 64bit version gives me hope for the human race. We expect Windows 7 to surpass Windows XP figures later this year.

On a CPU level, Intel are still dominating and their figures are slowly increasing with 69.58% of the market at their disposal. AMD users are opting for higher clocked CPU's in the 3.0-3.7ghz range while Intel's largest percentage is between 2.7 and 3ghz. Dual core processors still have the lead with a 54.77% share and while quad core figures are still low, this is the area which is growing the fastest – with 1.22% growth in a month. On the higher end, the new Intel 980X accounts for around 8,000 users which would amount to just under $8 million revenue for Intel.

nVidia still have a 61.88% share of the Steam graphics market however the company has suffered in 2010 with a 3.13% loss with AMD recording healthy growth. Direct X 11 has grown to 3.29% which translates to just under 900,000 gamers in total – with AMD's 5 series release advantage helping their own sales. They have stated they shipped around 6 million DX11 graphics cards which is certainly impressive. The new nVidia cards – the GTX 470 and the GTX 480 account for 5,600 and 3,900 gamers respectively. 1GB memory cards are pushing to the front, accounting for 23.70% with a 1.81% growth – the big picture however shows 512mb GPU's with a 36.29% majority. Another interesting fact to be gleaned from the report is that resolutions are getting higher with more people adopting full HD panels – with 1920×1080 getting 0.92% growth in a month (10.58%). We are glad to see this is the case – especially with 1920×1080 LCD monitors dropping so nicely in price in recent months.

The Steam report also shows a healthy increase in memory count with many gamers either buying new systems, or upgrading their current to allow for smoother gameplay. 2GB is still top of the charts with a 28.30% share, however it is paving the way for 3GB which makes sense as many 32bit operating systems are limited to this figure. 4GB has increased the most with just under 1% growth in a month and accounts for almost 19% of all Steam gamers.

KitGuru says: With DX11 gaining momentum thanks mostly to AMD, and Windows 7 almost in a position to finally topple XP we are pleased to see that gamers are finally beginning to adopt new technology. This is a very healthy situation for game development companies as they will feel more comfortable putting resources into catering for the latest technology. 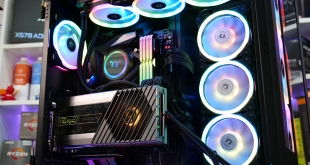