HP confirms that customers are not happy with Windows 8

It won't come as much of a shock to KitGuru readers, but HP has decided to go public with a confirmation as to why Windows 7 had to be brought back in. KitGuru scans the official HP statement and reads between the lines.

As the sale of PCs flattens out, in an overall economic market where growth seems to be the order of the day, senior HP management will have been looking at some dire figures – while trying to figure out where the next block of sales is coming from.

Independent research by KitGuru and many other top publications all produces the same kind of result: Windows 8 on a traditional desktop PC is a relative disaster.

In fact, a common topic of conversation among technical experts is whether Windows 8 is the worst OS  every launched by Microsoft – or does it have to yield that crown to Millennium Edition or Vista.

For KitGuru it is question of usability and productivity – and in both of these categories Windows 8 slumps WAY behind Windows 7.

This has filtered into HPs sales results and they were forced into taking the positive step of reintroducing Windows 7 – as reported on KitGuru a week ago.

Microsoft will be happy to know that Windows 8 has not been dropped altogether by HP in its desktop range. Yet. 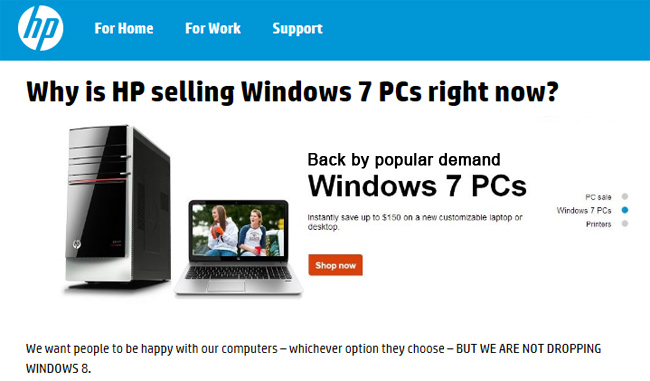 KitGuru says: Good news for people who want desktop systems with a keyboard and mouse.