Overclockers UK have just launched two new gaming systems in a new line of special edition ‘Marvel’ gaming rigs, one being their cheapest system aimed at 4K gamers, coming in at just £799.99. The other is aimed at those who are happy with 1080p and comes in at £329.95.

Let’s start off with the Marvel 4K, a new AMD-based PC featuring a wallet friendly price point and some pretty high-end components, including an Asus STRIX R9 390X graphics card and an Intel Core i5 CPU. Those looking to spend a bit more have upgrade options all the way up to an R9 Fury X along with more RAM and storage. 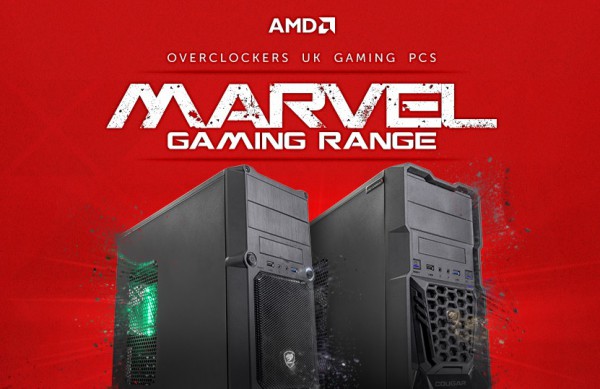 For the 1080p gamers out there, Overclockers has the Marvel 1080, which comes with an AMD A8-7670K APU, which should deliver console-level performance at a similar price. The usual customization options are there for both Marvel systems as far as the case and LEDs are concerned as well.

Each PC is assembled and configured by OCUK’s dedicated expert team and each system also comes with a three-year warranty for peace of mind. You can view the special edition Marvel range, HERE.

KitGuru Says: Overclockers UK has a very good reputation with its system builds, we’ve reviewed plenty of them here ourselves. Are any of you looking to buy a new system this year?