Back 4 Blood, Destiny 2: Beyond Light and more come to Game Pass

Like clockwork, Microsoft has announced the upcoming lineup of games set to be coming to its Game Pass subscription service. For the first half of October, subscribers can look forward to day-one releases, old DLC and more.

Making the announcement, Microsoft revealed the upcoming line-up of games set to make their way onto Game Pass over the next two weeks, namely: 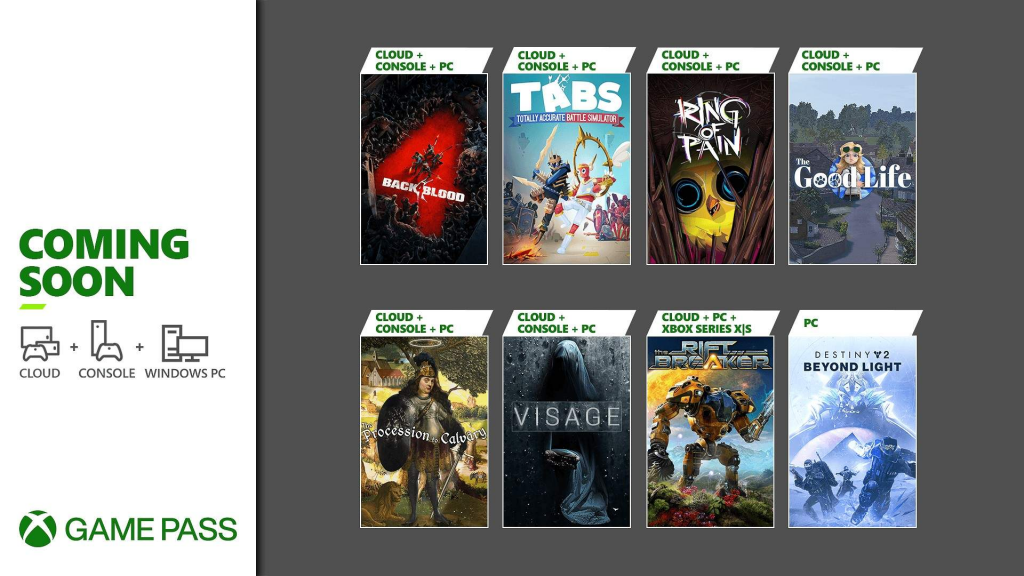 Of this list, by far the biggest addition is the upcoming release of Back 4 Blood. Developed by Turtle Rock Studios – who previously worked on Left 4 Dead – Back 4 Blood is a spiritual successor to the highly successful and much loved first person co-op zombie game. Back 4 Blood is the closest we will ever get to a Left 4 Dead 3, and so it is exciting to see it come to Game Pass as a day-one release – especially as it focuses heavily on co-op.

Another notable addition includes The good Life, which is the latest game from Swery65 (known for Deadly Premonition, The Missing: J.J. Macfield and the Island of Memories and more). This too, is a day-one launch on Game Pass.

Of course, we would be remiss to not talk about Destiny 2. Though free-to-play, the expansions cost a decent chunk of money, and so even though Destiny 2 Beyond Light is rather old now (having launched back in November 2020), it is still the latest release, with the next expansion – The Witch Queen – not coming out until February 2022.

While not an earth shattering line-up, the first half of October is looking to have a number of exciting and interesting day-one releases – and if we’re being honest, Back 4 Blood alone makes this line-up exciting.

KitGuru says: What do you think of the line-up? Are you excited for Back 4 Blood? How should Game Pass evolve? Let us know down below.