While the Doom name is considered to be legendary in the world of video games, in the past few years that name has been mostly associated with infinite delays, not technology or game play breakthroughs. At the E3 trade-show id Software and Bethesda Softworks decided to finally give a glimpse at the new game from this famous franchise.

The first trailer gives no idea about the story behind the new Doom and reveals nothing about the game play. What it does expose is the traditional set of things expected from Doom-branded games: heavily armed monsters/cyborgs/demons, creepy noises, bloody flesh, darkness and loads of futuristic high-tech machinery. 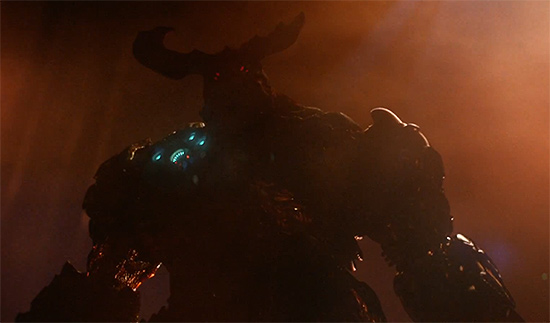 From technology and visual effects standpoints the game looks rather promising. The sequence indicates that the atmosphere of horror will be maintained, but it is completely unclear what the title will be about.

The teaser hints that more information about the new Doom will be revealed at the annual Quakecon video game conference. This year the show will take place at the Hilton Anatole Hotel in Dallas, Texas. The Quakecon will start on the 17th of July and will remain open through the 20th of July.

The new Doom is projected to be developed for Microsoft’s Xbox One, Sony’s PlayStation 4 as well as the PC platform.

KitGuru Says: Keeping in mind that development of the new Doom was completely re-started in 2011, it is hard to say whether the new game will be a sequel to the Doom III and will therefore portray the uprising of hell on Earth (like the Doom II did), or there will be an all-new scenario for the title.