Shipments of Microsoft Corp.’s Xbox game consoles were up 30 per cent year-over-year in the fourth quarter of the company’s fiscal 2015 (calendar Q2 2015) thanks lower price of hardware and improved availability of games for new-generation systems. This helped to increase Xbox hardware revenue to $1.045 billion. But does the situation really look good for Microsoft’s Xbox platform?

“Within Xbox, strong growth in consoles, online transactions and 1st party games, helped to drive revenue growth of 27%,” said Amy Hood, chief financial officer of Microsoft, during the company’s conference call with investors and financial analysts. “This progress, as well as the excitement that we generated at E3 with Xbox exclusive gaming content and backwards compatibility, demonstrates the building momentum that exists within the Xbox ecosystem.”

In Q2 2015 Microsoft sold 1.4 million Xbox One and Xbox 360 systems, its gaming hardware revenue was $1.045 billion, up 27 per cent year-over-year, but down slightly sequentially. Microsoft itself attributes massive YoY sales increase to Xbox One price-drops in mid-2014 and then in early-2015.

Microsoft Corp.’s Xbox 360 game console was an extremely successful product since it was released a year earlier than its competitor, it was cheaper, it was generally more powerful and it was easier to design games for. It took Sony years to reduce the price of its PlayStation 3 and make high-quality tools for game development. Late in the life-cycle Sony’s PS3 managed to outpace Xbox One in unit sales, but that was too late to make significant amount of money on the platform.

By contrast, Xbox One was launched at the same time as Sony’s PlayStation 4, its graphics processing performance is below that of the rival and, more importantly, it was more expensive than the competitor early in the lifecycle. As a result, sales of Xbox One have been trailing shipments of Sony’s PlayStation 4 globally since the introduction of both systems. Moreover, the popularity of the Xbox platform in general declined rather significantly in 2014.

The increase of Xbox sales to 1.4 million units in the second quarter of 2015 signals that shipments of Microsoft’s consoles begin to rebound and the new platform finally gets more popular. However, the Xbox sales are mostly driven by lower price, not by better games. Moreover, reports about massive success of Sony’s PlayStation 4 in Europe, where the platform has 90 per cent market share in certain countries, indicates that the situation does not look good for Microsoft. 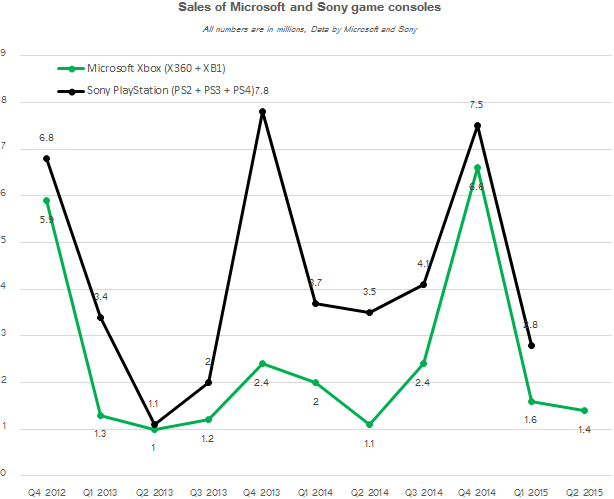 In fact, Sony PlayStation 4 alone has been consistently outselling Microsoft’s Xbox One and Xbox 360 combined since the introduction of PS4. Only in Q4 2014 the Xbox platform managed to leave PS4 behind in terms of sales globally, but overall Sony sold more consoles than Microsoft during the period.

KitGuru Says: It is good to see that Microsoft is returning to normal Xbox sales trajectory. Still, we do not know how Sony’s console business performed in Q2. The company unveils its financial results for the first quarter of fiscal 2016 on the 30th of July, 2015. It will be very interesting to see whether Sony’s PlayStation 4 outsells both Microsoft’s consoles again, or popularity of Xbox One is finally getting higher.