Microsoft’s Xbox Music app to be rebranded as ‘Groove’

A few months back, Microsoft announced that it would be rebranding its Xbox Music and Xbox Video apps for Windows 10, with the former being reborn as ‘Groove', Microsoft's own music streaming service for all Windows 10 devices. These new changes were detailed in a new blog post yesterday.

Microsoft will updating the app over time but for now, it is pretty much the same as the Xbox Music app. The app will feature light and dark themes and feature everything that is currently available in the Windows 10 preview app. Xbox Music was a subscription service with no free tier like Spotify, Groove will operate on the same business model. 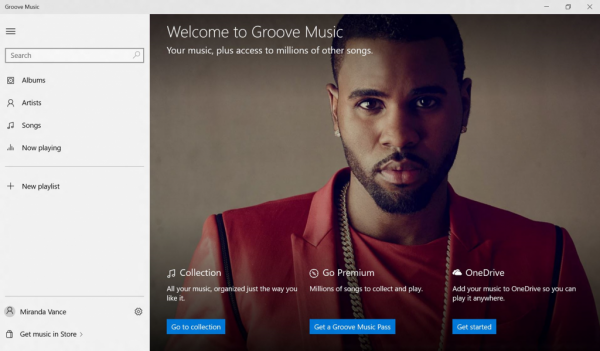 While in order to use Groove you will need to pay a subscription fee, Microsoft has noted that one of its future updates will allow users to upload their music library to OneDrive and then stream those to their Windows devices for free. However, OneDrive only gives you 15Gb of free space, so if you plan on uploading a lot, then you will also need to pay for Microsoft's cloud storage service.

The Xbox Video app is getting a less blatant relaunch, with the app simply being renamed ‘Movies & TV', with access to everything currently on the Xbox Video store.

KitGuru Says: It seems that Microsoft is looking to offer an alternative to Apple Music by launching Groove, although it won't be much different to Xbox Music for a few months. Did any of you happen to use the Xbox Video or Xbox Music apps? I used the Xbox Video app to rent a movie one time but aside from that, I've not really given them too much attention.

Previous Future Dragon Age: Inquisition DLC won’t come to Xbox 360 or PS3
Next The Pebble Time smartwatch is now available in the UK