Razer has revealed its new ‘Razer Arena' software, which will allow users to automate the process of finding competitive gaming servers and then tracking your progress.  The community will also be able to organize their own competitions and tournaments.

First of the software's functions is automatic match creation and reporting, which will find a decent competitive server for you and have you join it. There will also be game lobbies and voice chat, powered by Razer Comms, which has been around for some time now. 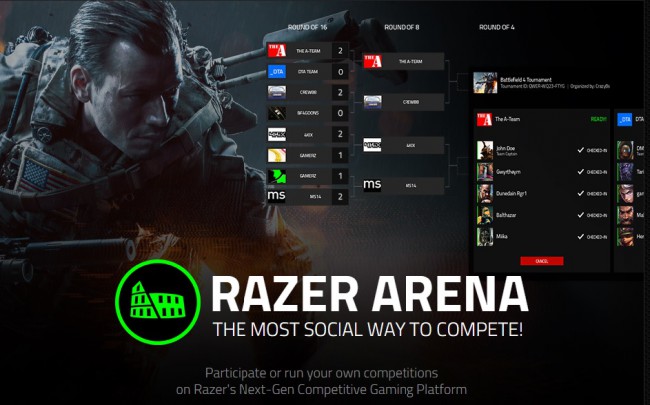 Users will get match reminder notifications for tournaments, which may reduce the amount of people that forget to show up in order to compete. Razer is also promising ‘cheater free' play, Razer doesn't elaborate on how it stops cheaters but I imagine the software is capable of detecting any dodgy files in the game folder, much like other forms of anti-cheat software.

The tournament administration and creation feature isn't available just yet but it will be ‘coming soon', whenever that is. This will allow people to create their own leagues or tournaments and compete against eachother, which could be good for University societies, or groups of friends.

The Razer Arena is currently in beta, you can sign up to use the software early, HERE.

Not all games are currently supported, developers need to get in touch with Razer directly if they wish to be included with the software. Currently supported games are limited to Counter Strike: Global Offensive, Dota 2 and Battlefield 4.

KitGuru Says: Given the sheer amount of cheating that goes on in the Counter Strike competitive scene, software like this has potential to work well for tournaments. What do you guys think of Razer's latest software venture?