You can now buy the Mad Max movies on Steam

Steam has expanded a lot over the last couple of years. The platform has experimented with movies in the past in the form of gaming documentaries, like Indie Game the Movie or Valve’s own documentary on the 2011 International tournament and now it looks like things are set to expand even further as the Mad Max series of films are now all available on Steam. 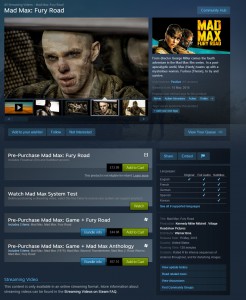 You can grab the Mad Max film anthology and the game for £67.10 on Steam. Each film costs £10 on its own, with the exception of Fury Road, which costs £13.99. There is a second bundle featuring just the game and Fury Road for £44.99 as well.

If this takes off, then we could end up seeing more big budget movies land on Steam eventually, which would help Valve in its effort to expand Steam as an entertainment platform for the living room, rather than just PC use.

KitGuru Says: The Mad Max game and Fury Road movie bundle isn’t too bad for the price, though the game has been getting some fairly mixed reviews. What do you guys think of Valve expanding Steam to movies?