Home / Software & Gaming / Assassin’s Creed Origins has microtransactions, but not like other titles

Assassin’s Creed Origins has microtransactions, but not like other titles

Assassin’s Creed Origins released today, giving the series a soft reboot and taking players into Ancient Egypt where it all started. Surprisingly, there has been little to no publicity on the fact that the game does contain clearly pay-to-win microtransactions.

Amidst the wave of games just released that contain controversial loot boxes, it’s rather strange that Assassin’s Creed didn’t make the cut while other triple-A titles such as Star Wars: Battlefront 2 and the similarly single-player Middle-earth: Shadow of War have been ridiculed left, right and centre on the matter.

This is perhaps because Assassin’s Creed Origins goes about it in a different, less intrusive way. While Battlefront 2 originally made it so that you could not progress your skills without partaking in loot boxes, and Shadow of War teased better loot boxes that could only be purchased with real-world money while you opened your pitiful, lower-tier box, Assassin’s Creed Origins keeps its store completely out of the way in a separate menu. 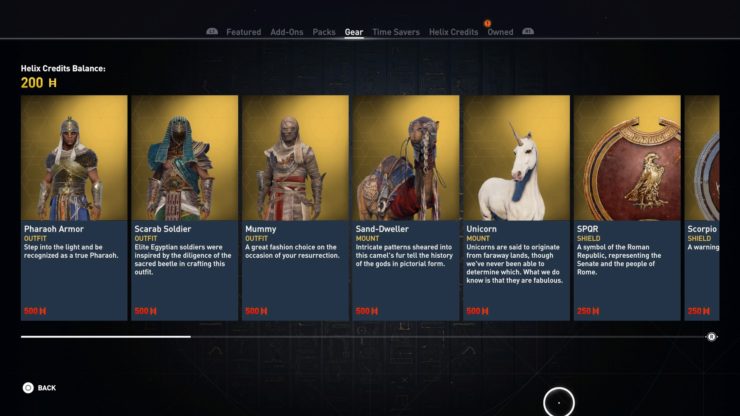 That’s not to say that it doesn’t sell pay-to-win items, as the store is filled with skill points, location icons, in-game currency packs, outfits and legendary weapons, but it does its best to keep each item as far from the core game as possible. These exist merely to save time under the meta title of “time savers”, without aiming to impact on the game itself.

While this is a full-priced $60 and many of you will feel that implementing a solitary loot box alongside microtransactions into a title is unacceptable no matter of the circumstance, Assassin’s Creed Origins is a true single-player game, so these items literally affect no one other than yourself. As for concerns that Ubisoft will have changed the core gameplay elements into a grind-fest to entice the purchasing of items, the gameplay is actually rather balanced, with many praising the changes made from past titles in the series.

KitGuru Says: How low-key the news has been on microtransactions within the game reflects how subtle the genuinely are in the title. Now that it’s known that Assassin’s Creed Origins has a loot box and microtransactions, does that change your stance on getting the game?

Previous PlayerUnknown states that single-player is possible, but a long way off
Next OnePlus 5T launch date suggested in new image