Patch 7 is just around the corner for Fallout 76 players, prompting Bethesda to unveil its upcoming seasonal event: Fasnacht Parade! Alongside some terrifying masks that debatably should have released at Halloween instead, the update introduces limited-time loot to collect and changes to Energy and Heavy Weapons.

“Each year, since the founding of Helvetia in 1869, the townsfolk celebrated Fasnacht by donning fantastic masks and parading through the decorated town,” reads the announcement post. “The festivities culminated by burning an effigy of Old Man Winter on the bonfire to signal the end of winter. The townsfolk may be long gone, but dutiful bots have kept the party rolling every year—and they welcome your participation!”

The event begins next week, on March 19, beginning when players interact with the Master of Ceremonies. It will last one week, tasking participants to aid the automatons “with a variety of party prep duties that may have you stepping on stage to play a cheery tune, choosing the perfect decorations, or exterminating some buzzing pests, among many other activities.” 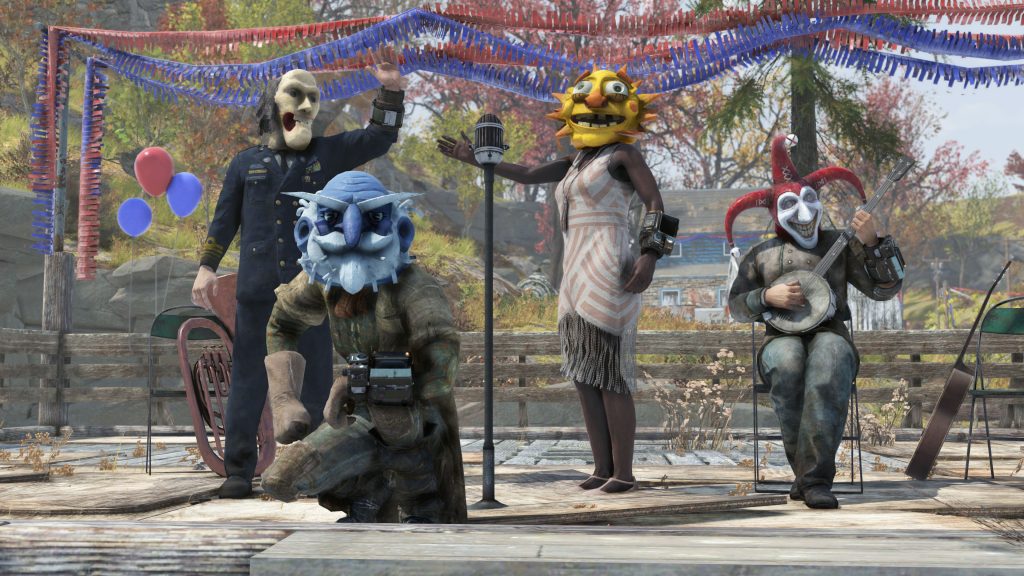 It sounds like it will primarily consist of fetch and defence quests, gathering materials and protecting the marchers in the parade from “party crashers.” These can be repeated as many times as a player wants to “earn some sweet loot” and potentially gather all four festive Fasnacht masks, although these wearables are rare. Saving marchers increases the chances of getting a mask, and they are tradable, putting duplicates to use.

Energy and Heavy Weapons users will have some adjustments to watch out for as they partake in the Fasnacht Parade however, as Bethesda has “greatly reduced the amount of condition damage” of both and “reduced the fire-rate for high rate-of-fire automatic heavy weapons.” Fortunately, semi-auto energy weapons have had their damage increased by 10% and their durability doubled, heavy energy weapons “last four to five times longer” before needing to be repaired and adjusted heavy weapons now do between 10-20% more damage depending on how much their fire rate has been decreased.

KitGuru Says: Although Fallout 76 has had a bumpy ride since launch, it’s good to see Bethesda engaging players with some free seasonal content. Personally, I think the blue Fasnacht mask is the most appealing, but it’s also the least horror-like one. Which one is your favourite?