Defiance 2050 is Trion World’s effort to rebuild 2013’s Defiance from the ground up, promising brand new textures, higher resolutions and an overhaul to gameplay systems that place emphasis on larger-scale action than its predecessor. With so much going on under the hood, just how much more intensive is Defiance 2050 to run?

Trion made the jump from DirectX 9 to DX11 with Defiance 2050, maintaining its 2.0GHz processor minimum requirement, but doubling its memory from 2GB to 4GB. This is still below average and should be achievable, however some systems might suffer with graphics. Although 2013’s Defiance supported integrated GPUs, Defiance 2050 requires users to sport an Nvidia GeForce GTX 650, an AMD Radeon 7770 or something better.

Both games run on the Gamebryo Engine, housing the same graphical options for players to choose from. Despite both Defiance and Defiance 2050 offering support for ultrawide resolutions at 21:9 aspect ratio, the remaining options are quite limited in comparison to other triple-A games. “Graphics Quality” only toggles shadows, bloom and motion blur on or off, while scaling the proxy memory.

Sadly, tests will not exceed 100fps as both games limit the frame rate to the upper refresh rate of the monitor, with mine being 100Hz. Initially, I could only switch between 60Hz and 100Hz, but the lower option was soon replaced with a choice of 49.99Hz, 59.97Hz and 84.96Hz. I can’t determine what caused this change, but the cap firmly remained on 100Hz throughout tests.

While the concept of ‘minimum frame rate' has been used in the past to determine the single lowest value of all frames achieved during testing, 1% and 0.1% lows give greater insight into the inconsistency between frames themselves by using frametimes. Once this number is converted back into frames per second for ease of understand, it carries the same concept of “the higher the number, the better,” but isn’t bogged down by as many outliers.

The system used for the tests is my personal build running Nvidia’s GeForce Game Ready Driver Version 398.36 released on the 26th of June, containing: 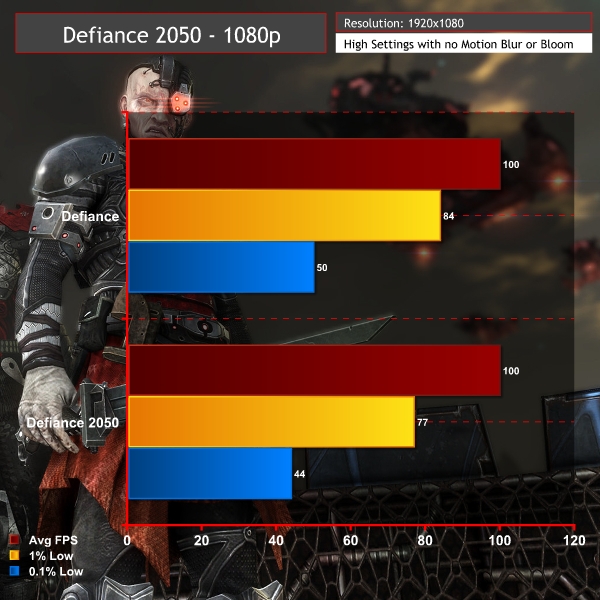 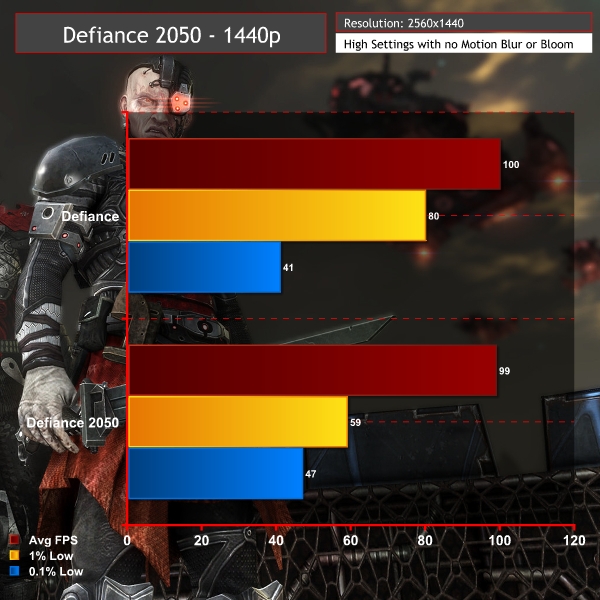 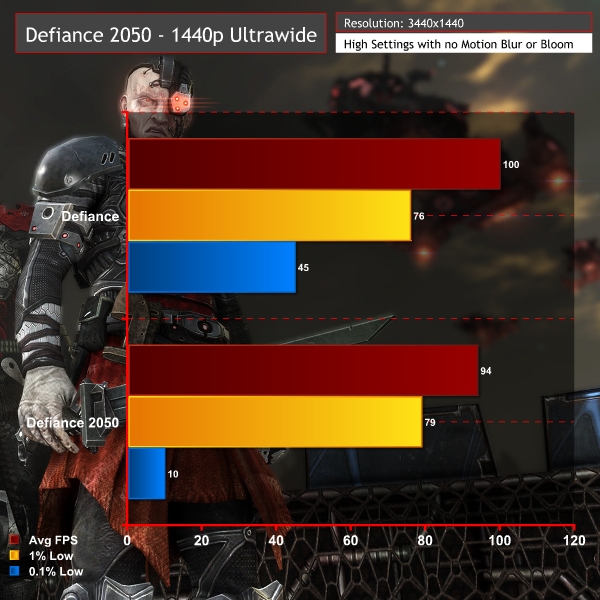 Testing each game proved incredibly difficult, with Defiance 2050 in particular crashing when attempting to alt+tab out of the game while in fullscreen mode, however this was only a problem when testing outside of my native resolution as fullscreen (windowed) worked like a charm. Trion also seems to prevent having both Defiance and Defiance 2050 installed simultaneously, prompting me to re-download each whenever I wanted to switch back. It's unclear as to why this is, given that the new version is supposed to be built from the ground up as a standalone remake.

Defiance 2050 certainly improves upon its predecessor with a more detailed experience, which inevitably takes its toll on the 1% and 0.1% lows. Those running either title at 1080p will be able to enjoy a relatively similar experience, allowing users to appreciate the hard work that Trion has put into the overhaul.

Higher resolutions were one of the things Trion promised with Defiance 2050, but it looks to provide a much choppier frame rate than the original when pushed past 1440p, often dipping below 60fps. Using ultrawide resolutions also proved a problem, not only dipping as low as 10fps, but repeatedly freezing during moments of action. The first Defiance game didn’t suffer from this problem, making it isolated to 2050.

Beyond the graphical improvement, Defiance 2050 looks to have improved its AI. While playing through the beginnings of the original game for this comparison, I noticed that enemies were quite docile, reacting poorly even when a player character was attacking them. Defiance 2050 has much more natural enemies, for the most part, immediately showing hostility towards players in order to create a challenge.

While the original Defiance was built around its one-time payment on launch, only transitioning to its free-to-play model a year into its lifespan, Defiance 2050 opts for this microtransaction-dependent system from the start. This is shown from its slightly pushy store model that advertises in the top right corner during loading times, however this is about as intrusive as it gets from my playthrough so far.

There is both good and bad news for returning players of the series. All previously release DLC is included within the base game of Defiance 2050, with Trion planning to support it with added content. Unfortunately, the real kicker is that characters made on the original version cannot be transferred to Defiance 2050. Some ‘titles’ and ‘vanity items’ have made their way over, but inventory, weapons and progress is bound to whichever game a character has been created on.

Overall, Defiance 2050 is a relatively comprehensive overhaul, if not a little unnecessary. Performance does take a hit in comparison to the original, but no more than what would be expected from a 5-year gap between games. While being great for newcomers, there seems to be little reason for loyal fans of the series to start all over again until new story content makes its way, meaning Defiance 2050 could perhaps struggle to find its footing.

KitGuru Says: I wasn’t a particular fan of the first Defiance, but it’s fair to say that Defiance 2050 has won me over little by little, particularly thanks to more reactive enemies. Once the server kinks are worked out, which is normal for most MMOs upon launch, Defiance 2050 could establish itself as a go-to shoot ‘n’ looter for 2018.