Even with its first two weeks being invite only, Fortnite managed to take iOS by storm, earning $15 million within its first month. Epic Games has continued to see rapid growth in the mobile game, increasing its profits almost sevenfold by hitting the $100 million mark in just 90 days.

Although Fortnite: Battle Royale’s run on iOS has so far been undoubtedly impressive, the title still lags behind Clash Royale according to data provided by analytics firm Sensor Tower. Clash Royale managed to achieve $1.2 billion within the same time frame last year, taking just 51 days to breach the $100 million mark.

Despite this, Fortnite has managed to beat out other main competitors, Honor of Kings and Knives Out. The iOS version of PlayerUnknown’s Battlegrounds didn’t make the cut for finalised sales as it had only been out for 60 days at the point of publication, however Sensor Tower estimates that the title has garnered a tame $5.2 million in that time. All of these figures, including estimates, exclude revenues from China. 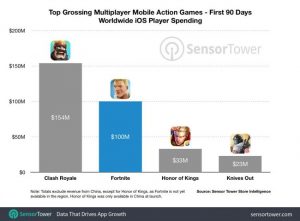 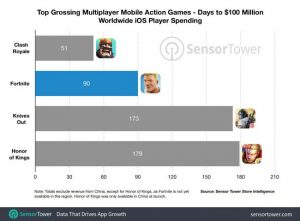 Fortnite’s numbers come from its cosmetics, alongside an open-platform policy that allows players the freedom of choice as to where they decide to play – provided it has the blessing of the console maker first. “Even apart from Battle Pass sales, we see Fortnite growing its momentum on mobile, and there are no indications of it slowing there—or anywhere else—as it continues its reign as the world’s most popular game,” Sensor Tower said.

While it seems like Fortnite has covered almost all basis at this point, it still has plenty of room to grow. The title has already added to its accolades as the first mobile video game developed by a company outside of Asia to breach the top five App Store revenue list since May 2017 and has yet to launch in China.

KitGuru Says: These are staggering numbers for a title that primarily focuses on home platforms. This is likely to spawn a lot of interest from other developers in moving to the mobile platform. Have you been playing Fortnite on mobile?