Insomniac’s Spider-Man received a release date last week, alongside the reveal that players will don a variety of different suits from the webslinger’s history. The second pre-order incentive has now been revealed via a leak, with the character strapping into the Iron Spider suit from Avengers: Infinity War.

Originally teased at the end of Spider-Man: Homecoming, Spidey fans were promised that Peter Parker would eventually step into the suit to protect New York, as well as the rest of the world. Through a recent leak, it’s been confirmed that not only will Tom Holland’s Marvel Cinematic Universe Spider-Man be using it as his suit of choice, but players will be able to do the exact same in Insomniac’s PlayStation 4 counterpart.

The leak has unfortunately been taken down, but not before a range of screenshots were grabbed to cement what’s to come. Along with the distinctive new red, blue and gold look, Insomniac has confirmed that each suit comes with its own special abilities. 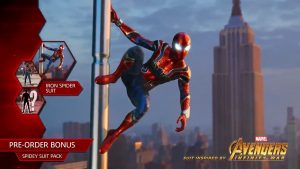 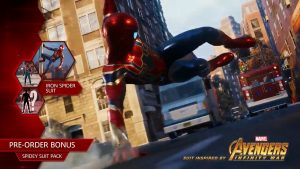 For those wondering why it is taking so long for Insomniac to reveal its costume plans for the upcoming PS4 exclusive, 3D character artists Xavier Coelho-Kostolny goes into detail on just how much effort goes into the process of making a new suit over in a lengthy Twitter thread.

Beginning with concept and pitches, the potential suits have to be filtered through a team that decides whether or not it is feasible and fits the initial vision of the game. Then it has to be checked by all partners to verify where the rights belong and if all parties are happy.

Then comes the design process, mapping out how it would faithfully represent the character while making it unique enough to warrant a separate design to other suits. After man concepts, drafts and subsequent feedback, the suit can then be built in 3D. The back and forth “feedback-and-updates” continues for a while longer, with the deadline in mind but with quality at the forefront.

Hey, you know what? Let's educate some people about how some game art stuff is made.

The Game Industry tends to be seen as a monolithic content factory, but it's made of people. Let's talk about this in the context of #SpiderManPS4

Once this is done, it is passed onto others for “rigging” and the blending of shapes, essentially crafting filling out the initial structure to something that can move naturally. Then it’s down to the animation team, which helps bring the character to life.

The process doesn’t end there, however, as Coelho-Kostolny notes that the interface and user experience teams have to fit these into the respective menus naturally so as to not break immersion, or in fact the game itself. Lastly, Quality Assurance ensures that product is fit for players around the world, suited to Marvel’s, Sony’s and Insomniac’s high standards.

KitGuru Says: It’s not really a surprise that Marvel would want to tie in one of its most anticipated films this year with its long-awaited video game. That being said, it is shocking just how much effort is placed into crafting something that many simply take for granted. Does this make you appreciate having a selection of suits a bit more?