Insomniac’s Spider-Man gets Spectacular new details, including a release date

Despite the lack of details on Insomniac’s Spider-Man since the title was revealed back at E3 2016, it looks like the title is coming in swinging. It has now been confirmed that the PS4 exclusive will release on September 7th, coming in a variety of editions that offer a closer look at what’s to come.

Sony revealed the launch date via its PlayStation blog, revealing that the title is set to come in three different editions. The standard edition comes in at $59.99, giving players access to a physical copy of the base game.

The Digital Deluxe edition retails at a higher price of $79.99, including three new post-launch story chapters, dubbed “The City That Never Sleeps,” featuring new missions, suits and characters. US and Canada residents are also lucky enough to receive a limited edition collectable pin with this edition. 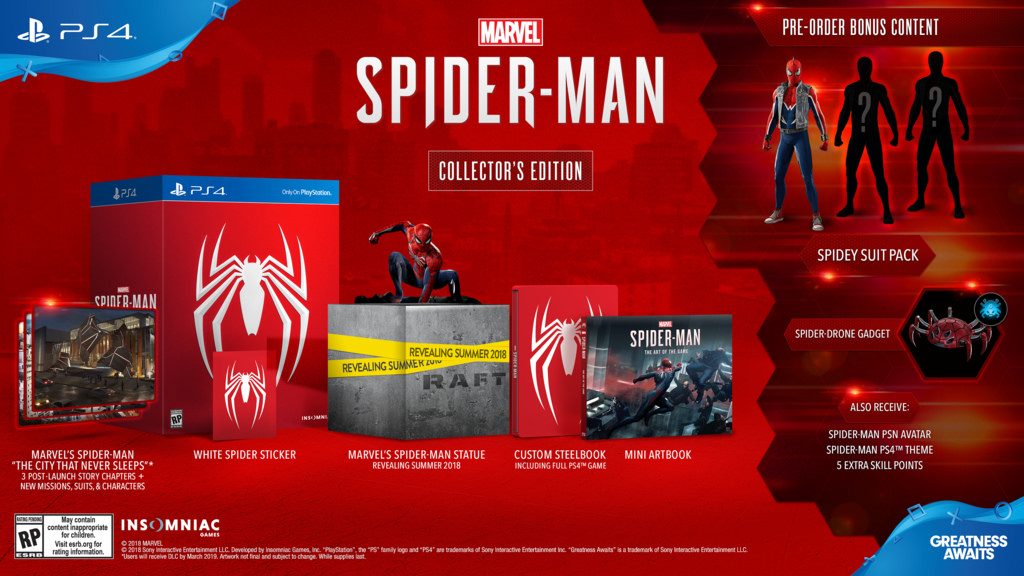 Of course, with handling such a prolific character, Insomniac had to offer a Collector’s Edition. This comes in at a price of $149.99 and includes The City That Never Sleeps, as well as an art book, a steelbook case and a statue of the Friendly Neighborhood Spider-Man perched atop something that will be revealed during the summer.

Those that pre-order will get access to extra content, including three costumes in the Spidey Suit Pack, the Spider Drone Gadget, a PS4 avatar, a theme and 5 extra skill points. Spider-Punk is the only revealed suit, with the other two still silhouetted. Both are expected to be revealed before July.

GameInformer is currently hyping its own May feature after a hands-on with the title, revealing that there is levelling and upgrades, which will tie in with the skill points system, as well as suit crafting to bring back some of Spidey’s classic looks.

The September 7th release date is slightly earlier than previous rumours had suggested, although this still lands on Friday, which is noted to be Sony’s preferred day for big releases. The upcoming God of War can also attest to this with its release on Friday 20th April, 2018.

KitGuru Says: It’s not long now, and it’s safe to say that my excitement for the title is back knowing that it seems to have a detailed progression system and cool costume features. Hopefully there’s enough variety of missions and the open-world is filled with things to do and Insomniac is sure to have crafted a winner. Are you excited for Insomniac’s Spider-Man?