Cloud gaming solutions have experienced a rocky start with some failing before gamers get a chance to experience them. Jump aims to succeed where its predecessors have not, offering a Netflix-style subscription service specifically for indie games, to support indie developers.

It can be difficult for indie games to get discovered, prompting Jump’s company chief Anthony Palma to tell Gamasutra of the hardship Kermdinger Studios encountered before the subscription service came to be. “We didn’t even launch our game because we knew we wouldn’t be able to sell enough to make it impactful.” Wanting to rectify this, Jump has the aim of benefitting its users, who get instant, unlimited access to a library of highly regarded indie titles, while developers get a better shot at being discovered.

Jump entered its beta stage yesterday, which will run until the 24th of July. Once the platform is fully launched, it will cost $10 per month for access to the library, currently set to include between 60 and 100 games.

“Think of it like Netflix. You go in there now and you get these very specific categories, like indie horror movies with strong female leads. That’s what we want to be able to do,” states Palma. “So we will be able to serve up not only games that you particularly will like, but we’re also gonna be able to resurface games. So just because your game launched in month three and now its month 12, it’s not going to be buried and unfindable.” 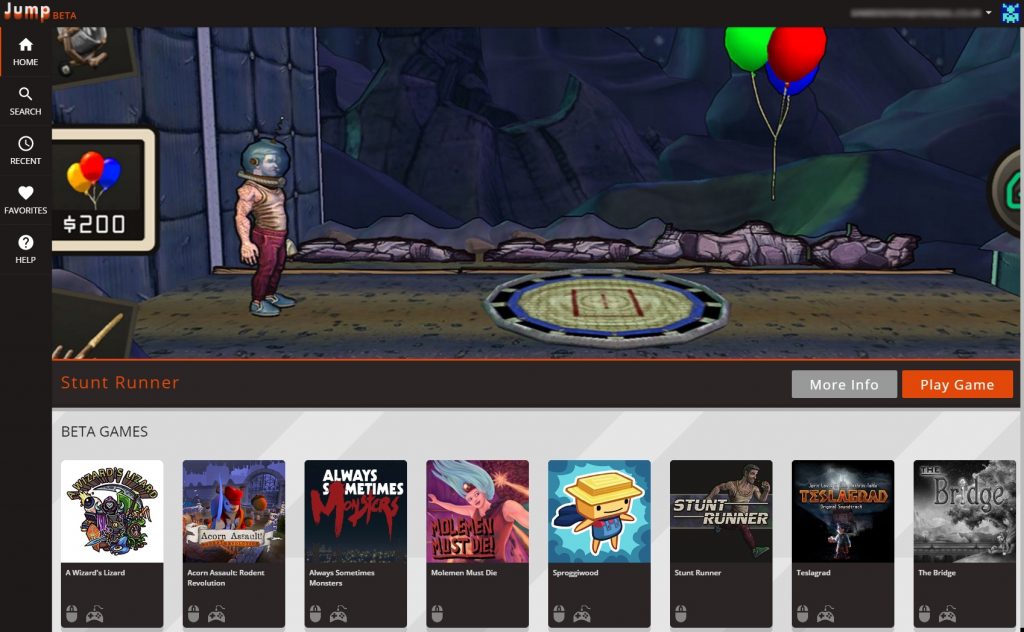 Regarding DLC, Palma added “We’re not going to do any sales of DLC, no ads, this is a very pure experience. But to incentivize doing DLC, what we’ll do is bump you back up into a top row that would say something like ‘New Content’… and so even if it’s 12 months after launch, all of a sudden you’re being discovered again by everybody. So we’ll have ways for devs to bring their games back up into the queue, so they’re not just going to get buried. And we’re going to grow the content library very linearly, so hopefully our users will outpace our content, so there will be a chance for good revenue on the platform.”

VP of Content Cade Peterson revealed more in an interview with IGN, saying that “Because we’re doing a very curated catalogue, each of the games will get enough of their time in the sun to earn money. This adds a whole new stream of revenue [developers] wouldn’t have gotten before, because a lot of the games will be able to earn money from customers who either passed on buying it in the first place or have never heard of it.”

Currently, the beta is only downloadable for a Windows version, but the service will be available across Windows, Mac and Linux at launch.

KitGuru Says: This platform sounds perfect for streamers looking for diverse content for their viewers as well as indie enthusiasts out there. Will you be testing the service?

Previous ASUS launch the Pugio, an ambidextrous mouse with switches you can swap
Next Facebook Messenger to begin showing ads globally