As a part of its ongoing FIX PUBG campaign, PlayerUnknown’s Battlegrounds finally received its in-house anti-cheat technology last month. Working alongside BattlEye’s defence against hackers, it’s now been revealed that 13 million cheaters have been banned so far.

PUBG has struggled with hackers since it gained popularity, with complaints reaching an all-time high in November 2017. Fortunately, Bluehole began to frequently update fans of ban waves, reassuring players that it was taking action against “unauthorised use of illegal programs.” Not only was Reddit user sjk045 able to determine that 13 million players had been banned after collecting all 69 data entries, they were also able to construct a graph to showcase the trend of ban waves as they happened. 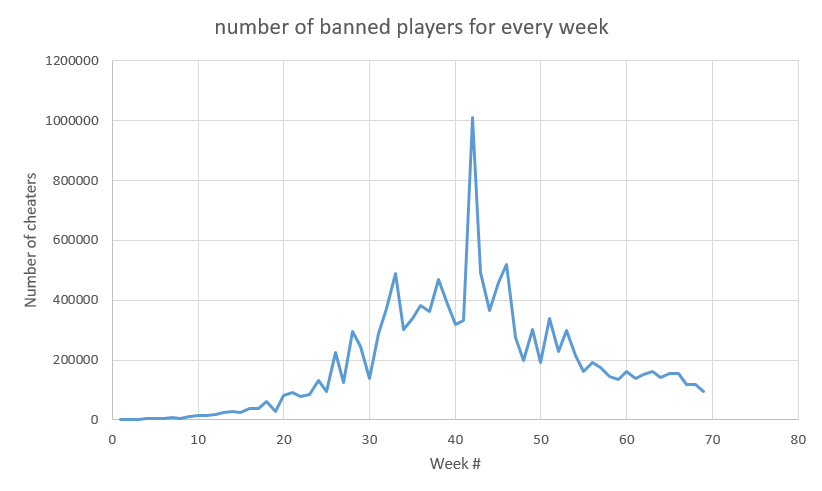 Although these stats show separate accounts being banned, it doesn’t consider individual players returning to the title under a different in-game name. Still, there is a noticeable peak where BattlEye had previously stated it managed to ban over 1 million cheaters in January alone.

This trend has crept downwards in the following months, prompting thoughts of success in PUBG's ongoing anti-cheat efforts, however a notable portion of this might come from the dwindling player base. PUBG dipped below 1 million concurrent players on PC last month, for the first time since it broke that barrier. Still, a peak of 961,139 concurrent players at the time of writing is certainly nothing to scoff at.

KitGuru Says: It seems that many players have moved on to other games like Fortnite, however it's much more difficult to determine how the current numbers stack against Epic Games' rival battle royale. Are you still enjoying PlayerUnknown’s Battlegrounds?