Rainbow Six Siege’s last Mid-Season reinforcements for Year 2 just landed in the form of update 4.2, coming with big changes to Ela and Twitch. Ubisoft also seems to be changing its controversial pricing system by replacing the Standard Edition with the more expensive Advanced Edition.

The structure of Rainbow Six Siege’s pricing has been the subject of a lot of debate, with the cheaper Starter Edition making the game accessible, but also much harder to obtain new operators in the process. Instead of changing this, which has garnered Siege a lot more sales, instead Ubisoft are introducing the Advanced Edition to replace the Standard Edition.

The Advanced Edition releases on February 13th and will cost $20 more than the Standard Edition it is replacing. In turn, the new package will contain more, but this will be comprised of 10 Outbreak collection packs to coincide with the upcoming Year 3 timed event and premium currency. The collection packs will contain cosmetic items in which the added $20 value is likely to be made up for, but only because Siege has a horrible tendency to overprice its cosmetics beyond belief. 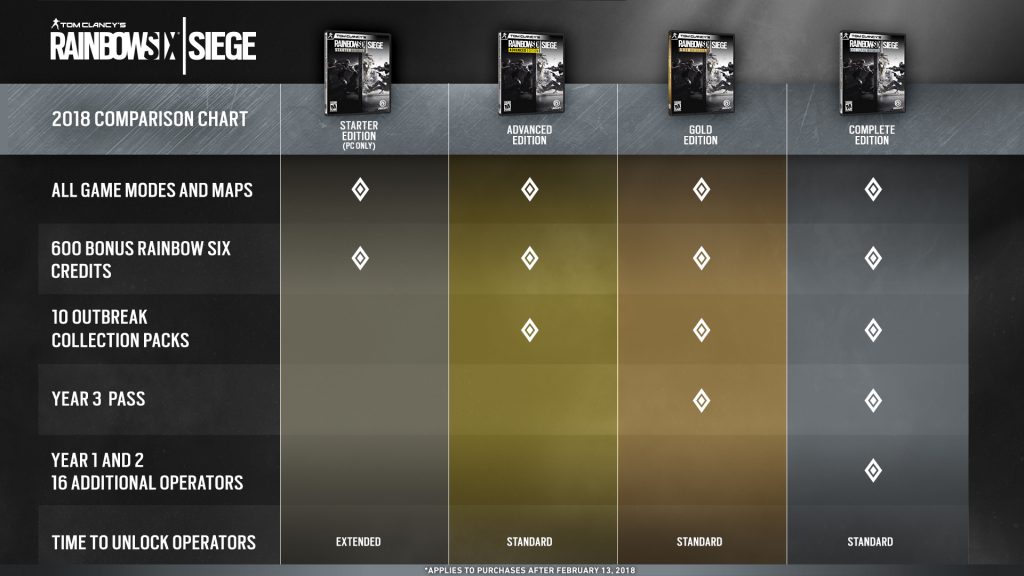 Interestingly, the Starter Edition that isn’t a recommended purchase due to how lengthy the times can be to unlock new operators, doesn’t seem to be changing its $15 price, yet will include the new bundle of 600 Rainbow Six Credits. This means the extra $20 is solely tied to the 10 Outbreak packs. Despite Outbreak being a timed event, new purchases of these editions will continue to receive these special packs even after the event has ended.

In other Siege news, update 4.2 is now live, introducing a series of changes to Ela, Twitch, Lesion, Ash, Capitão and Bandit. The most significant of changes comes to Twitch, who has had her Shock Drone reduced from 30 shocks between two drones to just 10 shocks, 5 per drone.

Ela was the main target of the patch, reducing her 50 round magazine to 40 and adjusting her concussion grenades. According to the developers at Ubisoft, people are likely to be unsatisfied with this change as it doesn’t nerf her as much as should be needed, but the developer’s hands are tied due to the Mid-Season reinforcements coming so close to Pro League.

For those interested, I gave a more in-depth breakdown when the patch notes were released two weeks ago

KitGuru Says: Personally, while I believe a Twitch nerf was somewhat necessary, I think Ubi has taken things a bit excessive through prioritising Pro League stats or even stats in general more than the actual style of players. Ela needs more of a nerf too, so hopefully this is the first in a series for her. As for the new pricing scheme, this seems like a bad change that doesn’t warrant the extra cost, but I will have to wait and see what Ubi has in store for the new model. What do you think of the changes in and around Rainbow Six Siege?