Operation Para Bellum is slowly but surely coming to a close, as Ubisoft has begun teasing details surrounding its next lot of content for Rainbow Six Siege. Titled Operation Grim Sky, this will be the first time in over a year that the developer has returned to a traditional seasonal update with one attacker and one defender, as well as its first ever map rework.

Both new operators will act as Rainbow’s Urban Tactical Response Team, codenamed Grim Sky (GSUTR). While their names have yet to be revealed, they can easily be distinguished as a Brit and an American, with Ubisoft sharing parts of their history with us.

The Brit is a defender, described as “a tough police officer who’s an expert on mob behavior and snatch-squad tactics,” meant to extract a single perp out of a mob of people. According to the image, she’s equipped with some form of riot shield that’s mostly transparent and with two shimmering lights on its front.

While it’s unclear what her shield might be used for, speculation has split people down the middle. Some fans believe she will act much like Blitz and Montagne do on attack, perhaps with a special ability we don’t yet know of, while others think her shield might be deployable with a built-in electric element. The latter lines up with leaks that date back to May of a “hole blocker” which has sat alongside code that indicates there will also be an “audio alarm” in the game at some point. 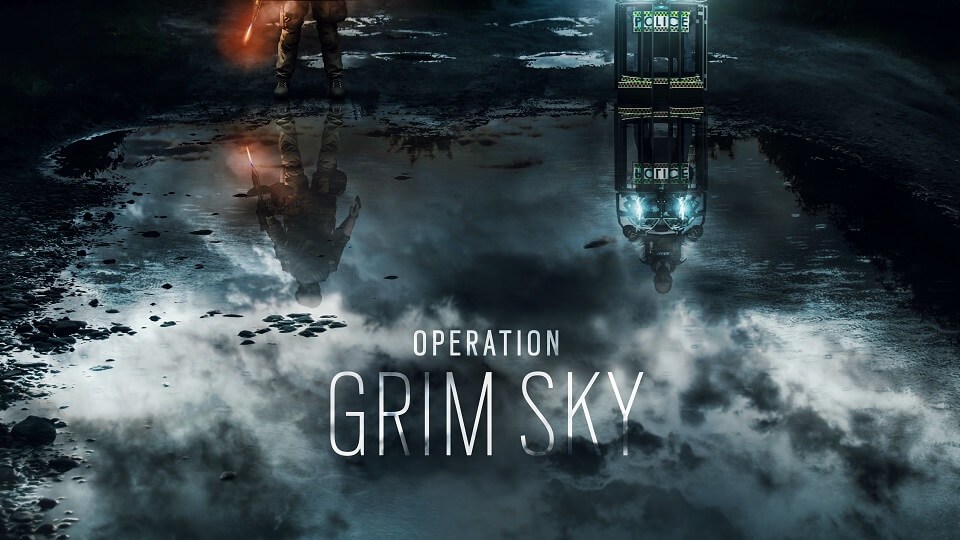 The American attacker is “a specialist with a remarkably sharp mind when it comes to tactical operations,” known for his “surgical precision.” Within the image, he is seen holding the long-rumour blow torch also found within the game’s code. This is believed to be the highly anticipated third hard breach operator, firmly distinguished from Thermite’s Exothermic Charges and Hibana’s X-KAIROS Pellets.

While this sparks a return to normal, after Operation Health gave us no new operators, both Blood Orchid and White Noise gave us three, and both Chimera and Para Bellum gave us two attackers then two defenders respectively, the map will not be a new addition. Instead, Ubisoft will be debuting its first full map rework from the ground up: Hereford Base. Notable among the changes is a shift from its contemporary design to a WWII theme, but the most exciting thing is it becoming viable for competitive play. This means we should see Hereford Base return to Ranked, and possibly see it within ESL’s map pool.

Lastly, Siege players will finally be getting the new recoil system that’s been trialled for the past year in order to quell misalignment issues. There’s undoubtedly more behind Operation Grim Sky, that we will likely find out through leaks in the run up to its official unveiling during the Paris Major from August 17th to 19th.

KitGuru Says: It’ll be interesting to see just how meta changing these two new operators are. The potential of a new, unique hard breacher is always welcome given just how big of an addition Hibana was in Red Crow. What do you think of the new operators so far? What would you like to see from Grim Sky?