Board games can make you really think and feel too

[As a heads up before starting this piece, it contains spoilers for the discussed game, “Train”]

Imagine you’re at a gaming expo. You sit down at a table with a few other players, to have a go at a simple looking train management game. It’s all about efficiently loading passengers into the carriages to maximise their number. You notice that this game is a little different though, as instructions for your latest goal come from a typewriter, while the game board itself is a train track suspended above a broken window pane.

Sometimes the rules aren’t clear though. You’ll need to make house rule decisions on the fly with other players, but that’s fine, you can deal with that. Perhaps the game isn’t finished yet. So,you keep turning over cards and completing tasks, loading all of the little yellow figures into the carriages as neatly as possible. At some point during this time, you’ll draw the final card of the game, that one that not only signals that play is done, but what your whole purpose has been in the game.

The card reads: Train destination: Auschwitz. This is where you realise that you haven’t been playing an innocent train loading game, you’ve been bundling Jewish families into boxcars, before sending them off to their ultimate doom. Not only that, but you’ve become complicit in it, as you didn’t just follow the instructions given, you came up with your own rules to figure out the best way to do it. You used initiative, in killing innocents.

The most dangerous game board in history?

It’s at this point that many players react quite emotionally. According to the creator of the game, Brenda Romero, some players have cried, others have gotten angry, some have sat and rolled the the dice, systematically unloading the yellow figures from their carriages; one even hid them under the board, while another announced that the train was instead heading to Denmark.

Romero spent nine months developing Train, hoping it would inspire serious thinking about a situation, by involving players on such a deep level before making the reveal. “People blindly follow rules,” she said. “Will they blindly follow rules that come out of a Nazi typewriter?” Most times, yes, is the answer.

KitGuru Says: While I think any of you (including myself) reading this far would’t be able to get the same effect from the game as those who don’t know what the big reveal is, it’s still a great concept. How do you think you guys would feel making the discovery of what your ‘innocent’ gameplay had been – theoretically – doing.

Previous Where in the world are you, in Google Maps?
Next Fired Starcraft 2 pro Idra quits competitive play 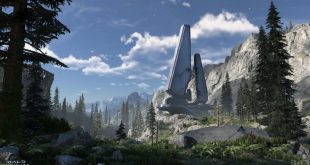 343 Industries has provided another update on Halo Infinite this week. This time around, the …