Buying Mario Kart 8 at Best Buy? Have some free petrol

Game pre-order bonuses have become a big thing in the past few years. Since Minecraft showed the world that gamers were willing to pay for unfinished content and potential, every publisher has begun offering gamers the chance to pay for games that aren't out yet. To encourage this spending before seeing, many companies offer bonuses, like discounts on the retail price, pewter models and in-game content, but sometimes publishers and retailers go off in an entirely different direction. Take the Mario Kart 8 pre-order bonuses at Best Buy in the US. You can get free petrol if you put some money down before the release date. 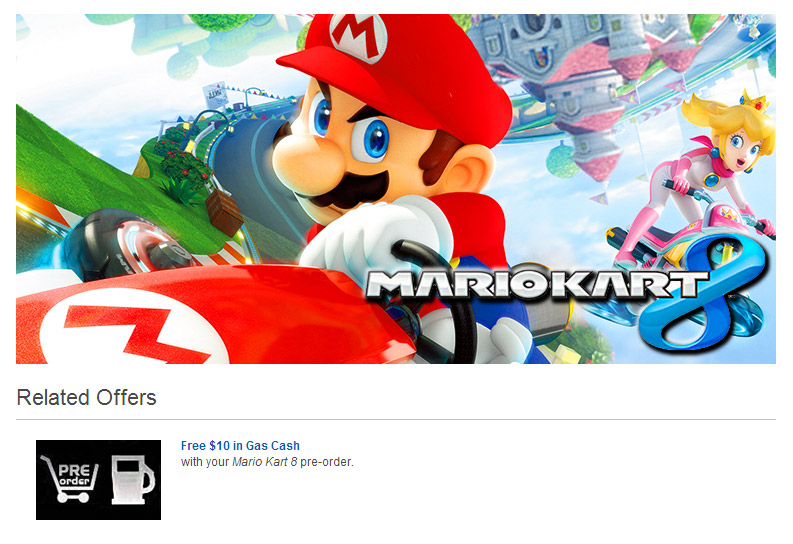 Just wait, someone will claim this is encouraging real life road karting…

Anyone pre-ordering a copy of Mario Kart 8 on the Wii U at Best Buy in the next few weeks, will get a $10 coupon for petrol. While here that might not go very far, as Wii U Daily points out (in a depressingly lamenting fashion) that $10 “only” gets you a “few gallons.” Admittedly though with typical American vehicle fuel efficiency, that won't go as far as it might elsewhere.

Mario Kart 8 is currently slated for release on 30th May, with Nintendo said to be planning a specific Wii U bundle for the game and console, which should shift a few units at least.

KitGuru Says: If any game could give the Wii U a kick start, it's Mario Kart or Smash Bros, but the latter isn't coming out until later this year. Nintendo is no doubt banking a lot on those two titles.