Home / Software & Gaming / Can an AI speedrun Pokemon Red faster than us?

Can an AI speedrun Pokemon Red faster than us?

One of the strangest phenomenons to come out of the growth of online game streaming and let's plays, has been the popularisation of speedrunning. Using hidden exploits, precise movements and an endless well of persistence, players have blown through some of history's most iconic and often difficult games in minutes, rather than hours. However as with everything, there is a limit to how fast these games can be beaten…by a human, but what about an AI? 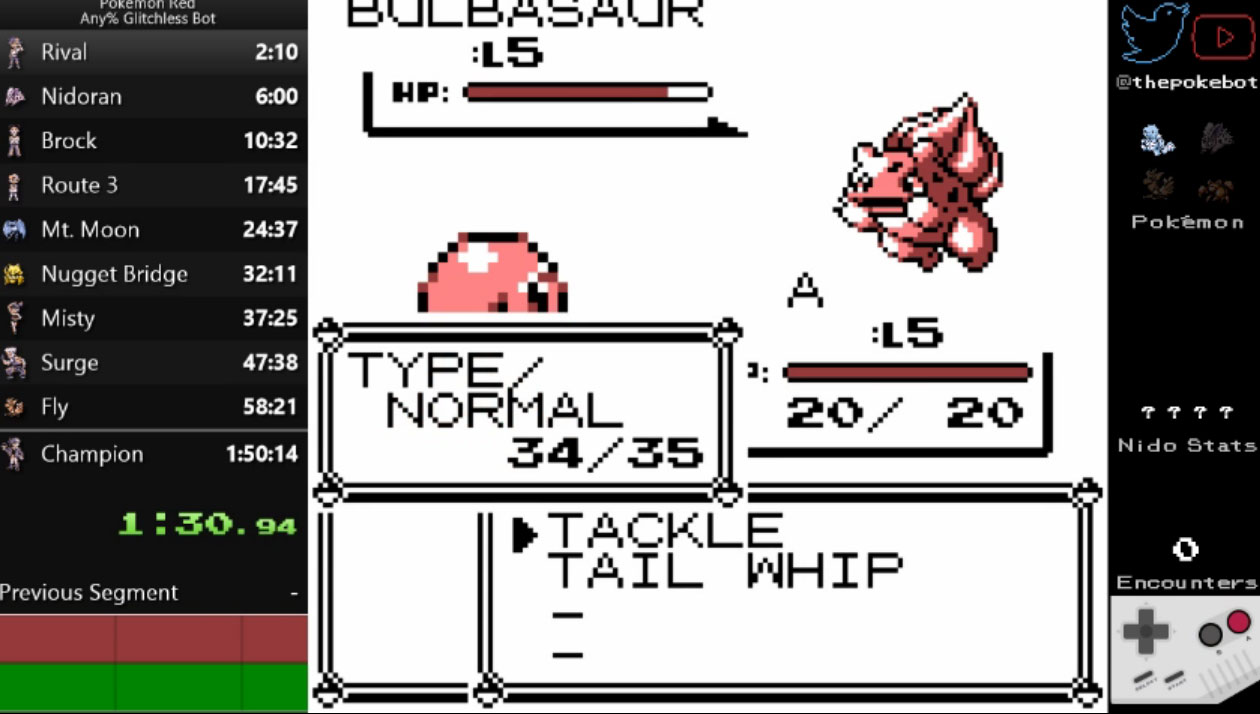 Keeping “encounters,” under 15 for the whole run is paramount

That's what's being put to test at the moment by ThePokeBot, which is attempting to beat the world record for trouncing the Elite Four and that dastardly rival of ours. The best human achieved time is one hour and 49 minutes on the Game Boy Colour, which is no mean feat in itself. However the bot so far isn't far behind, having achieved a time of our hour, 50 minutes and 14 seconds.

However this is all above board. The bot, while able to input certain information like character names and similar in potentially faster times than a human, in every way possible it's playing just as a human does. This is also a speedrun without glitches or cheats too. So it's pretty official.

Something that human players are unlikely to do with the game though is be as persistent as ThePokeBot is. To put it into perspective, it achieved its record on 13th April and hasn't been able to beat it since. As the guide itself puts it on the main page, since the route to beat Pokemon Red in the fastest time is well optimised the bot is merely playing the game using that information and will reset itself if it falls behind an ideal time or its own records.

For instance, the game uses a Nidoran on every run through and if around the 11 minute mark it doesn't have stats that are equal to or better than 16 attack, 15 speed and 12 special, it will reset the game. There is about a 22 per cent chance of those stats being achieved.

It can happen sooner though. While writing this story, the game reset at just over the six minute mark, because it had fallen 20 seconds behind capturing the Nidoran.

KitGuru Says: Watching the bot's cold playing of such a beloved game is a little strange, but interesting none the less. Even when it resets so often, it's still less frustrating than watches two fish control what's going on.

Previous Don’t Starve Together gets Giants and new characters for free!
Next Supply of AMD Radeon R9 390-series may be constrained – report