Danny Trejo might be that guy that you see in movies and go, “oh yea, him,” but he’s got quite a life-resume on him. He was a prison boxing champion, actor, voice-over artist and star of a number of music videos and games. His latest project though seems pretty apt for the 71 year old: selling CS:GO weapon skins with his shirt off, and threatening the life of Lord Gaben himself. 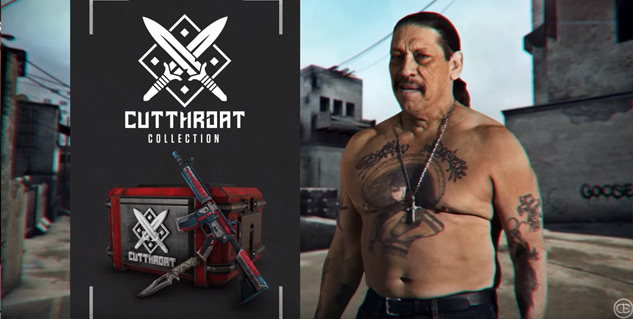 Trejo doesn’t like what you tried to do with mods Gaben.

Chris “C-LegFX” Le is the man behind the new Cutthroat set of gun and knife skins and he certainly took an interesting tack with his advertising by hiring on the action star. It’s a great choice though, as the weapons are based around classic B movie guns, one of which Le plans to release each week. Guns tweaked to look that little bit different for a price include the: sawed off shotgun, M249, Desert Eagle, dual Berettas, Tec-9 and the R8 revolver.

Trejo isn’t just a great choice for this because he is one of the most quintessential B-Movie action stars we have today, but because he knows the creator (thanks Kotaku). Le is also a movie director, having put together the upcoming Juarez 2045, which stars Trejo as a robot touting drug-kingpin. So these guys have worked together before. They know how to do over the top awesome/silly.

KitGuru Says: If the big boys can utilise big name actors to sell games like Call of Duty, it seems only fair that some of the modders/skin-makers can get in on the action too. If you have a connection like Machete and you’re in a pinch, you use it, we know that at this point. He’s the only guy who can get the job done.