Kickstarter success and all round childhood dream title The Stomping Land, is fast approaching its beta release and to celebrate that fact, the creators over at SuperCrit, are releasing extra details about the game every day over the next week.

So far we’ve reached day II, which breaks down who exactly the player is in this dinosaur dominated world and how they can survive – if they’re careful. “You are a hunter and a scavenger,” it begins, really highlighting that this isn’t some dinosaur slaughtering romp through the wilderness. This is Rust, with lizards that weigh upwards of five tonnes trying to eat you.

But it’s more dangerous than even that pantless, infested world: as most dinosaurs in The Stomping Land can kill you with one hit. Most of them too, you can’t even kill if you get a bunch of your fellow hunters together. Your little spears and arrows just won’t do enough damage. How do you scavenge from these great beasts then, you might be asking? By letting other, bigger dinosaurs kill them for you.

“It’s up you to track these epic prehistoric creatures, let them fight to the death and then salvage the remains.” Just as with Rust and those lovely supply drops of C4 though, in Stomping Land there’s other hunters to watch out for and finding yourself first to a big kill is only good if you can get what you need and get out fast. 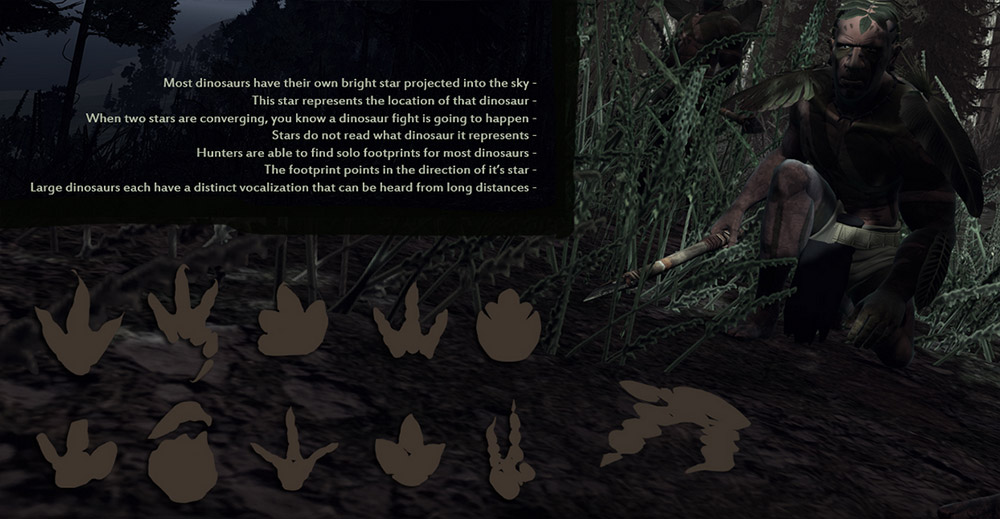 Tracking will require patience and skill, especially with the more elusive dinosaurs

While we didn’t know that some dinosaurs couldn’t be killed before, it seemed quite self explanatory when you consider the size of these things and how thick their hide would have been, early human technology really wouldn’t cut it. One element we haven’t heard or figured out before though, is the tracking that Stomping Land will employ.

To find these giant dinosaurs, which have better meat and resources to gather from, you’ll need to use footprints, with each major dinosaur having a unique spore. However you’ll also be able to hear them in the distance and tell them apart by the sound. But if you get stuck and need to track them over huge distances, Stomping Land has stars that follow each of the major dinos around, giving you a rough idea of their location. When two come together as well, you know there’s a big scrap going on somewhere. You won’t be able to use them during the day though and expect rain and ambient sound to make finding footprints or noises that much harder.

Stomping Land is set for release on the PC in April.

KitGuru Says: This is Molyneux’s BC, but with PVP. This could be an amazing game. I for one can’t wait to try it.