Working at an energy drink company apparently gives you some pretty decent perks. Those likely include an inability to sleep and burgeoning kidney damage, but one of the others is the apparent ability to get invites to publishers’ studios to play unreleased games, like 2K Games’ Evolve. Developed by the guys behind Left 4 Dead, Turtle Rock, Evolve has been making waves since it originally debuted at PAX earlier this year and we played a few rounds at Multiplay i51 and thoroughly enjoyed it, but if you’re thinking of heading into the jungle in the near future, a few tips from the Redbull crew might come in handy.

For the hunters, Redbull recommends two characters take on pivotal roles: the trapper and the medic. The former, because its monster disabling abilities and sound spikes, allow you to actively control where the monster is and when you don’t know, find it faster. The medic on the other hand, needs to be kept alive at all costs. It’s much easier for a medic to revive you if you go down protecting her, than the other way around.

If you’re the support too, sacrificing yourself to get an orbital bombardment to land square on the monster’s face is a viable option, especially if you’re low on health. 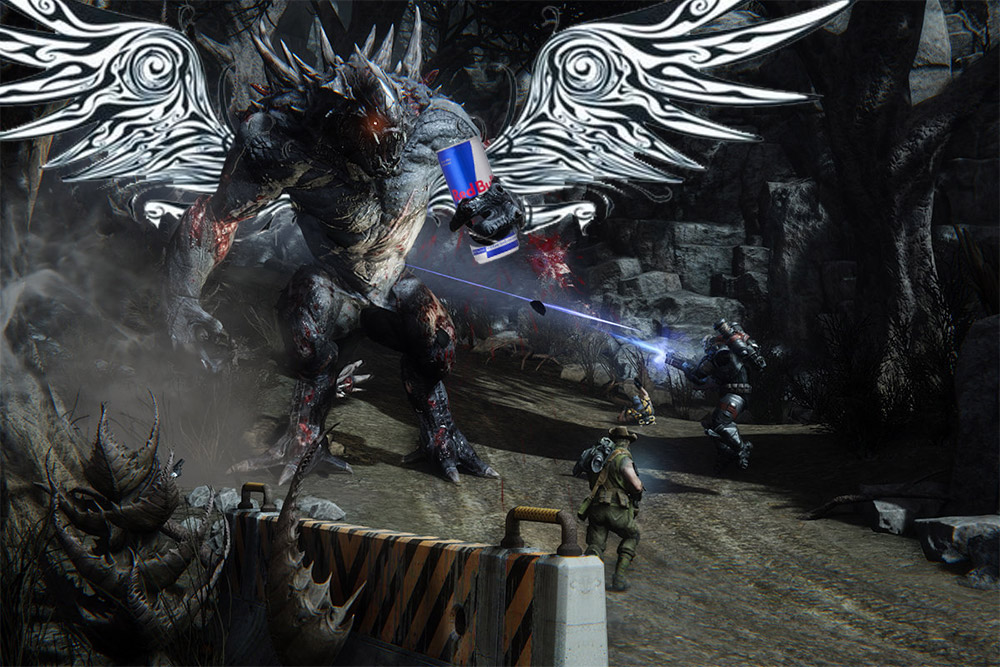 I smell a sponsored game mode…

If you happen to playing as the hulking Goliath though, you want to be as mobile as possible and as accurate as you can with your leaps. Sneaking is fine for the odd moment of tense stealth, but jumping from rock to rock and tree to tree leaves no footprints. Mastering that, will be the key to staying alive long enough to do some real damage.

I never got the hang of the fire breathing in my quick play, but Redbull recommends you use it as a way to highlight cloaked players, since it’s hard to be invisible when you’re on fire.

And of course, never, ever forget that the crocodile in the swamp can one hit KO any of the hunters. Luring them into its clutches can be the most useful and hilarious way to even the odds in the game.

KitGuru Says: I don’t drink energy drinks, but I do pound a good few Yorkshire tea each day. Not sure that qualifies, but Turtle Rock, if it does, I’d be up for a trip to your HQ. Just saying.

Previous Computer memory prices to remain stable for now, but future is unclear
Next Bombshell is 3D Realms’ next game