Home / Software & Gaming / 1:1 scale of Denmark in Minecraft blown up by players

1:1 scale of Denmark in Minecraft blown up by players

Last week the Danish government revealed its 1:1 scale replica of Denmark in Minecraft, the map was later put online to let curious players explore the country. However, things started going wrong pretty quickly when gamers were joining servers  just to blow up Danish towns and rebuild American flags and tanks on top of the rubble.

Chris Hammeken, Chief Press Officer at the Danish GeoData Agency, gave a statement to state media outlet, DR (translated by The Register): “Several large Danish towns have been levelled to the ground and a lot of new things have been built all over the place. We don’t have a complete overview yet, but we’ll probably choose to reconstruct Copenhagen and the other cities.” 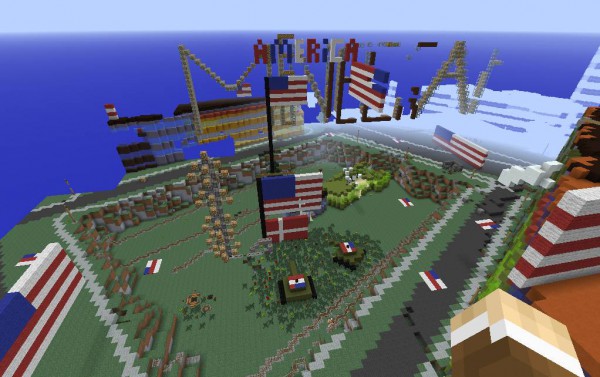 A lot of work went in to this replica, it took 4000 billion blocks to build and the map is over 1TB in size, so as you can imagine, the government weren’t planning on allowing people to blow it up. Dynamite was actually blocked on the servers to avoid this sort of thing but The Danish Geodata Agency failed to disable the minecart with dynamite item.

Areas that have been damaged will be re-built when necessary, the Danish government also recognises that these things happen in Minecraft and as a result, it doesn’t care too much that this has been happening:

“We consider that as a nature of playing Minecraft – elements are broken down and new are being created.Therefore we will not reboot the demonstration of Denmark in Minecraft. But occasionally we will rebuild minor areas if buildings are removed and nothing new is being created. We are very happy to see so many players around the world creating fancy nice things and have fun.”

KitGuru Says: A complete 1:1 scale of a country is seriously impressive, the fact that it took 4000 billion blocks to build and the map is around 1TB in size shows that a lot of dedication went in to building this. Obviously, we don’t all have 1TB free to dedicate to one Minecraft map so it will be off-limits to some but that hasn’t stopped 200,000 people downloading it so far. Have any of you guys checked out the Denmark map? We had something similar happen with Britain last year when a map of the country was re-built in the game.