December has officially begun and the first wave of additions to the Xbox Game Pass library for the month have been announced. Obviously, this month's biggest game is Halo Infinite, but there are other notable games coming over the next few weeks , including Aliens: Fireteam Elite, Stardew Valley, Among Us and more.

On the 2nd of December, ANVIL, Archvale, Final Fantasy 13-2, Lawn Mowing Simulator, Rubber Bandits, Stardew Valley and Warhammer 40,000: Battlesector will be added to Xbox Game Pass, followed by Space Warlord Organ Trading Simulator and Halo Infinite on the 7th and 8th of December. On the 9th of December, Manga fans can dive into One Piece Pirate Warriors 4 and finally, on the 14th of December, Among Us (console) and Aliens: Fireteam Elite will also be added. With the exception of Among Us, all other games listed here are coming to Game Pass on console and PC. 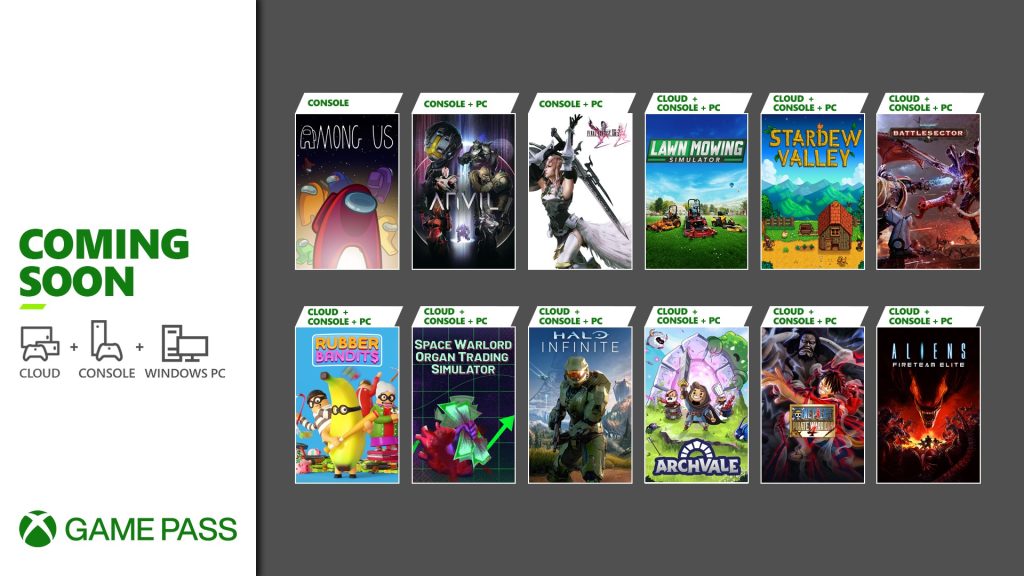 Unfortunately, some games have to leave the Game Pass rotation to make room for new releases. On the 15th of December, six games will be leaving Xbox Game Pass, including:

Xbox Game Pass Ultimate subscribers will also get access to some new perks this month, including a Halo Infinite multiplayer bundle, which includes four XP boosts, four challenge swaps and a skin for the in-game assault rifle.

KitGuru Says: What do you all think of this month's Xbox Game Pass additions so far? Will you be giving any of these titles a download over the next couple of weeks?

Previous CD Projekt Red working on bringing multiplayer to The Witcher and Cyberpunk
Next Take-Two claims it owns the words Rockstar, Bully and the letter R