Bloodborne was announced at E3 this year but the PS4 exclusive is coming sooner than you might think. The Dark Souls-esque title, developed by From Software, will launch on the sixth of February 2015, we’ve also got a brand new trailer, straight from the Tokyo Game Show.

From Software found success with the launch of its PS3 exclusive title, Demon Souls, which was praised as one of the hardest games around. Since then, the developer has stuck to a familiar formula with Dark Souls and Dark Souls II. The developer looks to continue this trend with Bloodborne: 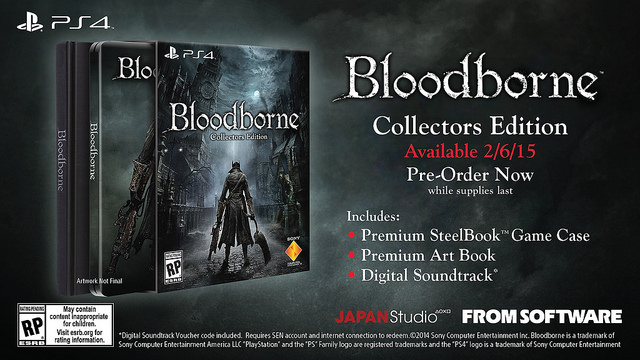 The collectors edition is limited while supplies last and will include a fancy steel book case, art book and digital soundtrack. From Software has stated that if the demand is there, it may also consider bringing Dark Souls II to the Xbox One and PS4 consoles.

KitGuru Says: It will be interesting to see how Bloodborne fares critically compared to Dark Souls and Demon Souls. From Software seems to have found its own little gaming niche with its games. Are any of you guys looking forward to Bloodborne? What do you think of the ‘Dark Souls’ formula?