Call of Duty: Infinite Warfare trailer lands on the web

Last week, a PlayStation Network leak and several promotional poster leaks revealed that this year's Call of Duty would be titled ‘Infinite Warfare' and would come bundled with a remastered version of Call of Duty 4: Modern Warfare. Now, Activision has gone ahead and released the official trailer and announcement for the game, revealing some details about the plot, gameplay and release date.

The trailer goes on for just under three and a half minutes and just like the last two Call of Duty games from Treyarch and Sledgehammer, this one will be another futuristic shooter. However, Infinity Ward is said to be taking a more ‘Sci-Fi' approach to this year's release, with plenty of time spent battling it out in space. 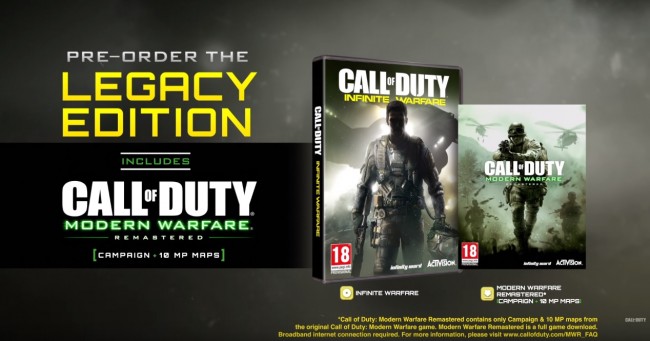 Call of Duty: Infinite Warfare will launch on the 4th of November this year. There will be a standard edition and a Legacy Edition, which comes with the Call of Duty 4 remaster, which includes ten multiplayer maps and the full campaign.

KitGuru Says: Call of Duty: Infinite Warfare is continuing to push the futuristic shooter trend that has taken over the franchise over the last few years. Hopefully Infinity Ward can improve its efforts on the PC side this time around as while Ghosts wasn't a great game on any platform, the PC version was lacking quite a bit.

Previous If Yahoo does sell, CEO could receive £37 million payout
Next Samsung to ditch microUSB for USB-C on Galaxy Note 6