With Monster Hunter World: Iceborne’s early PC issues now presumably resolved by the latest patch, it is time to start looking towards the content updates and big events coming in 2020. Just like the base game, Iceworld will feature new hunts and special collaboration events. This time around though, Capcom is aiming to achieve update parity between PC and consoles, meaning no platform has to wait longer than the other.

Iceborne on consoles is already a couple of months ahead of PC in terms of post-launch content updates, so it will take a while for PC to catch up. Currently, Capcom expects to ‘sync’ up all platforms from April 2020 onward, which is good timing, as the “return of a fan-favourite monster” is coming in May. 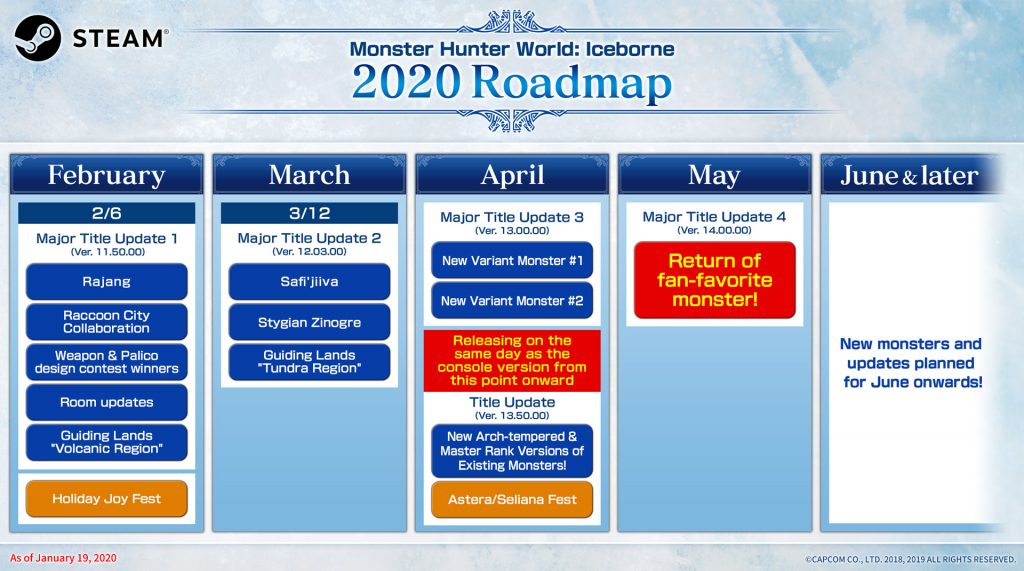 In the image above, you can see the current update roadmap, with the Racoon City collaboration event coming in February. In March, PC players will get two new monsters to hunt and in April, there will be an in-game festival event, new high-rank versions of existing monsters and new variants for two existing monsters.

There will be more updates for the second half of the year, with content coming to all platforms at the same time. We don’t know what this will include, but hopefully we can expect some more big collaborations as well as some returning monsters from past games.

KitGuru Says: Have many of you been playing the Iceborne expansion this week? What do you think of the current post-launch roadmap?