Most Star Wars fans have dreamt of wielding a lightsaber at one point or another and now thanks to the Oculus Rift- you actually can. Using some Optitrack sensors, and an Oculus Rift DK1, Benjamin Teitler was able to create a lightsaber training simulator from scratch.

In the video you can see that Teitler is using a laptop packed away in his backpack to allow for free movement across the room. In earlier videos he used a long USB cord attached to a desktop. 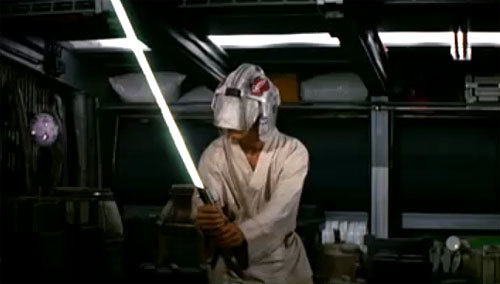 He made this demo himself so it’s not available for other rift users to try out. However, he does have a few other videos available that show off his lightsaber simulator.

In an earlier demo video, the poster said that he was using a Optitrack Mocap system (12x Flex 13), Oculus Rift DK1, 60 Ghz Wireless HDMI transmitter/receiver, a battery pack to power the rift and a  long usb cord for head tracking of the rift.

KitGuru Says: I’ve always wanted to play something like this. Unfortunately, this simulation requires some expensive extra sensors to allow for proper tracking with the Oculus DK1. However, seeing it in action is still pretty awesome, maybe this time next year virtual reality will be at a point where we can all play cool games like this.