Gears of War: Ultimate Edition comes with the sequels as well

Back at E3, Microsoft announced Xbox One backwards compatibility and now we are starting to reap the rewards of that. While only the first Gears of War game is being remastered for the Xbox One, those who pick it up will also get free digital copies of all of the Xbox 360 games in the series, which will be playable on Microsoft’s current generation console. 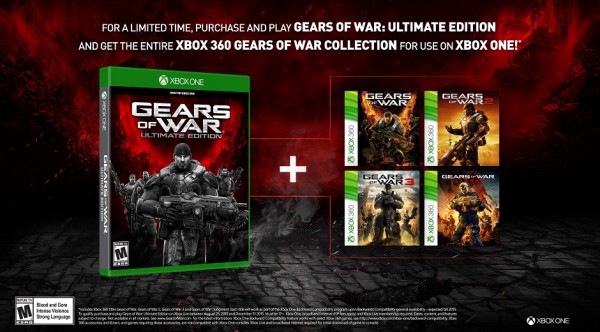 This is a limited time thing though, you would need to play Gears of War: Ultimate Edition any time between the 25th of August and the 31st of December in order to qualify for the Xbox 360 copies of the other games in the franchise.

Gears of War Ultimate Edition launches in a few weeks time on the Xbox One. A PC version is also on the way ahead of Gears of War 4 next year, although we don’t have a release date just yet. Microsoft also has more announcements due for both Xbox One and PC at Gamescom tomorrow.

KitGuru Says: I never got to beat Gears of War 1 so I’m looking forward to the ultimate edition. The backwards compatible copies of the other games in the series is also a pretty nice touch.