Home / Software & Gaming / GOG: Gamers are not criminals and do not need DRM

GOG: Gamers are not criminals and do not need DRM

Should the video games industry rid itself off Digital Rights Management (DRM)? According to GOG North America boss, Guillaume Rambourg, it absolutely should. GOG has always taken a negative approach to DRM, in-fact no game on the store is allowed to include any form of rights management.

DRM is used by game developers and publishers to combat piracy, although these days it very rarely works and actually does more to hinder the game. Rambourg sees DRM as a form of punishment for those who actually buy games rather than an anti-piracy tool: “We totally believe that distributing games without DRM is a good thing for our industry,” he told Eurogamer. “Let’s make it easy and rewarding for gamers to buy games. They are not criminals and they do not need DRM.” 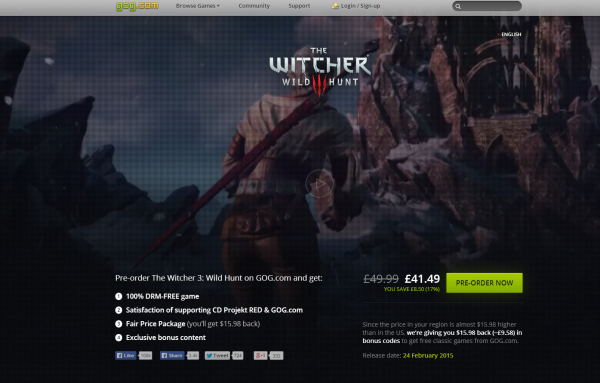 “DRM is only impacting the good-hearted passionate gamers out there. The very same gamers who are ready to spend $50 or more to own their favorite triple-A title and support our industry. Our industry should be cherishing and treating all gamers with respect, those people who pay our wages, servers, development projects and what not. Instead, we just make it frustrating for them to buy games. How schizophrenic is that? DRM is not protecting any product. It is harming your fans and your brands in the long run.”

PC gamers have had plenty of time to get used to DRM at this point but it hasn’t really done anything to combat piracy and more often than not, it actually causes more issues for people who bought the game. A recent example of this would be the launch of Watch Dogs. Uplay servers couldn’t handle the amount of people trying to log in and play- as a result, some buyers couldn’t play the game for a couple of days. However, those who had downloaded the game through a torrent could circumvent the DRM and get straight to playing.

KitGuru Says: It’s always nice when a company stands up for the PC gamer and it does raise some interesting discussion points. DRM doesn’t stop piracy, that much is clear, right now in its current form it only seems to cause problems for those that do buy their games, especially at launch. Here’s my question for you guys, should developers and publishers bother trying to protect themselves from piracy? Should the industry rid itself of DRM entirely?

Previous Quadcopters could be used to explore Titan
Next The first 20nm processing unit? A Bitcoin miner!