Blizzard has announced that the iPhone and Android smartphone versions of Hearthstone won’t be available until early next year, although Android tablet owners will be able to get the game before Christmas. The CCG has grown immensely in popularity since it launched in closed beta form last year.

So far the game is available on Mac, PC and the iPad, until now Android and iPhone versions were expected before the end of the year. “The team has been hard at work to bring Hearthstone to that platform, and is making great progress. We’re taking things one step at a time and we’ve got our sights set on a release for Android tablets, our next new platform, before the end of the year; we’ve just got a few more mana crystals to polish and some Angry Chickens to chase down.” 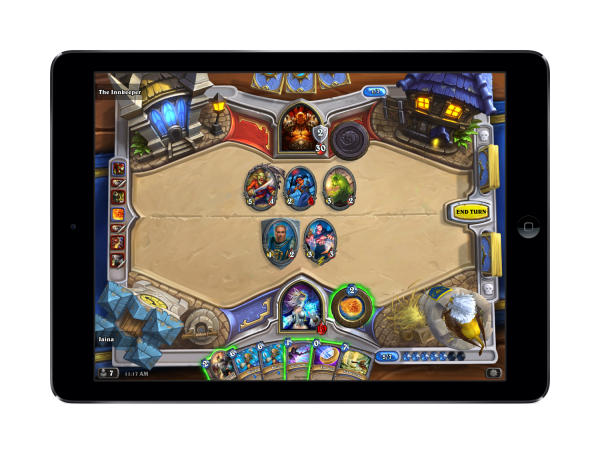 “We’re also close to having Hearthstone out to our iPhone and Android phone users, but it’s become clear that we need a little more time to get that version right. While we have a build up and running internally, it needs a bit more work, and we don’t feel like we’ll be ready to share it with you until early next year.”

Blizzard is hoping to make the mobile versions of Hearthstone just as accessible as the PC version, stating that the UI still needs some tweaking for the smaller form factor. Over 20 million people currently play Hearthstone, it’s not known how many of them play the iPad version but I’m sure many players would be more than happy to battle it out on the move.

KitGuru Says: The iPad version of Hearthstone works very well but smartphones tend to come with smaller screen sizes and as a result, the UI will need some tweaks to take that in to account. Blizzard is also working on its next expansion pack, focusing on adding in new cards to the game. Do any of you guys still play Hearthstone? I still enjoy a few rounds every so often.