Hello Games tweets out ‘No Man’s Sky was a mistake’, confusion ensues

Hello Games and Sean Murray have been awfully quiet since the launch of No Man's Sky, which is most likely down to the poor reception the game got from critics and buyers alike. However, earlier today the studio showed some signs of life on Twitter, with the Hello Games account posting “No Man's Sky was a mistake”. Since then, news outlets across the web have been scrambling to get the full story, with lots of conflicting information going around.

Following the tweet, two outlets, Mashable and Forbes, received emails from Hello Games claiming that the tweet came from an angry employee. In a separate report, Polygon claims to have received an email coming from Sean Murray's own address, in which the team lead takes responsibility for the tweet. 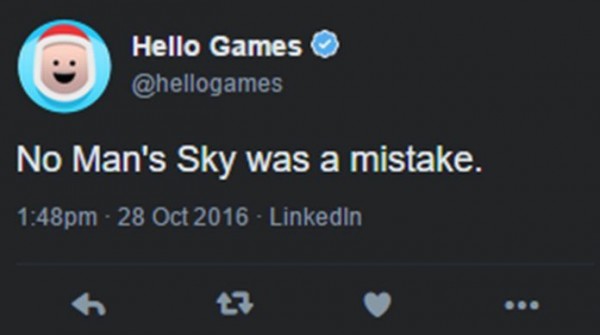 Since then though, Sean Murray has actually tweeted on the No Man's Sky Twitter account for the first time since August, stating that the Hello Games server was hacked: “Server hacked. We're binging Mr Robot Episodes as quickly as we can looking for answers. Ep05 is a cracker”.

He then followed that up with another tweet saying “if anything was a mistake, it was using Linked In without 2FA”. This seems to back up the theory that Sean Murray's email account was hacked, leading to a takeover of the company Twitter account. Either way, things seem to be up in the air at the moment, hopefully the story can be cleared up soon.

KitGuru Says: Given how everything has gone down with No Man's Sky, I wouldn't be surprised to learn that the tweet came from an angry employee at the studio. However, for now there is too much conflicting information going around to really point the finger in any one direction. We will update this story should more information come to light.