Batman: Arkham Knight launched yesterday and has already kicked up a storm in the PC gaming community. While the game runs fine on consoles, it is very clear that the PC version did not get the same treatment. In-fact, we learned that Rocksteady actually outsourced PC development duties to a small studio with just 12 people working on the port.

Now there is no patch yet, after all, Rocksteady didn’t even have much of a hand in the PC development of this title so it is fair to speculate that it may be heavily relying on the small 12 man team at Iron Galaxy Studios to work some serious overtime. However, Rocksteady does have some advice for PC users having issues, though I warn you it isn’t particularly good advice. 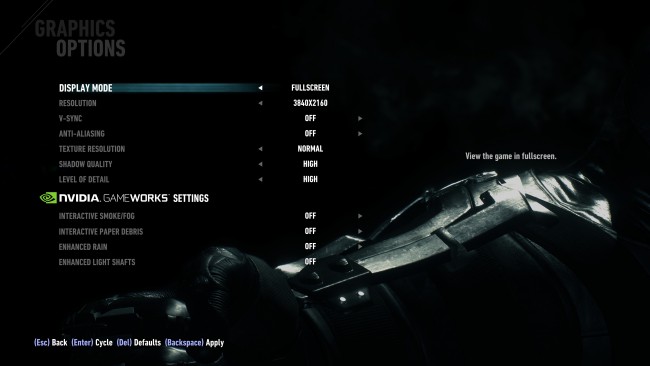 Rocksteady’s advice to users who meet the minimum system requirements (which include a Core i5 and a GTX 660/Radeon 7950) is to leave the 30 frames per second cap on, turn the resolution down to 720p and turn the few graphical options you actually have in the game off entirely or to their lowest option.

This rather unhelpful advice remains the same for those on the recommended hardware specification. Those running a GTX 760 or higher may have the pleasure of turning the resolution up to 1080p, although Rocksteady recommends that nobody goes higher than this. The 30 frames per second cap rule still applies here, although you can turn your shadow, texture and detail level settings to ‘normal’.

As you would imagine, Rocksteady recommends that nobody use the Nvidia specific effects- which take up half of the graphics options menu on their own. So there you have it, Rocksteady doesn’t really have a solution for you, just awful advice in a desperate attempt to make the best out of a bad situation.

You can find our analysis of the Arkham Knight PC port, HERE.

KitGuru Says: This ‘advice’ from Rocksteady really does not instil me with a ton of confidence that the game will ever be fixed properly. In-fact I almost get the feeling like they are going to try and get it running at 30 frames per second for most people and then call it a day, though I am just speculating here. Overall, Arkham Knight has been a massive disappointment on the PC and its a huge shame to see Rocksteady fall so low on the final game of the series.