Konami has been trying its best to silence Kojima and not offer any confirmation as to what is going on between the two. The company even went as far as to say that Kojima was merely ‘on vacation’ recently but that illusion was shattered last night when Geoff Keighley revealed that while Kojima had planned on attending the Game Awards, Konami’s lawyers stopped him in his tracks.

Metal Gear Solid V won the 2015 award for best action/adventure game, and Big Boss voice actor, Kiefer Sutherland accepted the award on Kojima’s behalf, following which, Geoff Keighley decided to break the silence and just give us the truth that Konami has trying to keep hidden. You can hear what he had to say between 0:56 and 1:59 on this video captured by Kotaku. Alternatively, you can read what was said below. 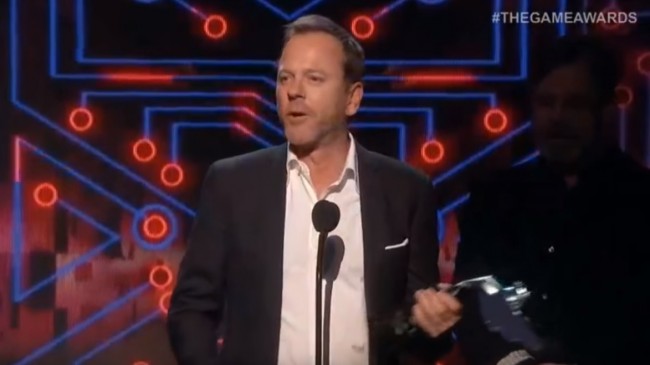 “As you noticed Hideo Kojima is not here with us tonight, and I want to tell you a little bit about that, Mr. Kojima had every intention of being with us tonight but unfortunately he was informed by a lawyer representing Konami just recently that he would not be allowed to travel to tonight’s awards ceremony to accept any awards. He’s still under an employment contract, and it’s disappointing, and it’s inconceivable to me that an artist like Hideo would not be allowed to come here and celebrate with his peers and his fellow teammates.”

From the sounds of it, due to Kojima’s employment contract with Konami, which doesn’t officially run out until later this month according to previous rumours, the famed game designer was not allowed to travel out of Japan to attend the show.

KitGuru Says: Sony also held a PlayStation awards show earlier this week in Japan, at which Kojima also wasn’t allowed to accept an award for MGS:V, instead Konami’s head of PR accepted the award so at this point it seems that the bosses at Konami are just being spiteful, despite the fact that the game went on to sell millions of copies.

Monster Hunter Rise will release on PC next year

Monster Hunter Rise is set for a big launch on Nintendo Switch next month, but …