Microsoft’s Azure Cloud servers could be used on competing platforms

Microsoft has revealed that it won’t lock outside developers from using its Azure Cloud technology, not even studios working on exclusive titles for competing platforms like the Wii U, PC or PlayStation 4. The comments specifically came from Phil Spencer, who has been heading The Xbox division since last year.

Writing on Twitter, a fan asked Spencer about Titanfall 2 and its potential use of the cloud technology that appeared in the original game. Given that Titanfall 2 likely won’t be a Xbox One exclusive, the fan said that they would “hate to see the franchise lose out on Azure Cloud computing and servers”. 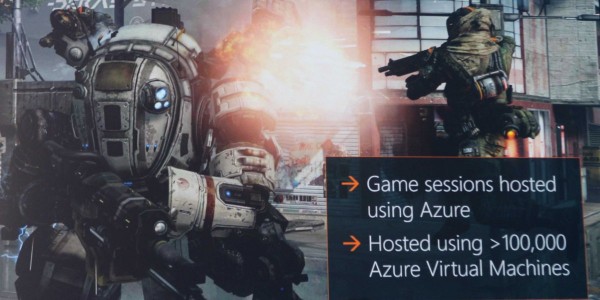 Spencer then responded, saying: “Azure services are available to any game, even other platform’s exclusives. We wouldn’t keep someone from using”, unfortunately, he could not elaborate further on any specific titles: “I know people want me to comment on specific 3rd party games, I just can’t. Sorry”.

The use of cloud servers was first seen in the original Titanfall back in 2014. Microsoft’s cloud servers helped power the AI characters within the game and helped the developers keep up the frame rate. This technology is also set to be used for the physics processing for next year’s Crackdown game, which will also be Xbox One exclusive.

Respawn is working on a sequel to Titanfall right now but so far, we don’t know any details on platforms or if the series will continue to use the Azure Cloud servers to help power parts of the game.

KitGuru Says: Not many people put much stock on Microsoft’s cloud compute servers, particularly when it comes to gaming. However, for specific titles, the additional power could really help, especially in titles with advanced artificial intelligence or a lot of physics-based action going on- as we will see in Crackdown next year.