New Monster Hunter: World trailer shown off at TGS, will get a worldwide release in January

At E3 earlier this year, long-time fans of the series were pleased to see Monster Hunter: World presented live on the Sony stage. Now at TGS, more of the game has been revealed, with a world wide release date planned for the 26th of January 2018 for consoles, with PC coming a little later.

Monster Hunter: World will be the first time that the series has come to the PC in the west. In the game’s latest trailer, we get to see even more of the environments we’ll get to explore and monsters we’ll get to fight. The cinematics also do a good job of showing of making the campaign seem epic and large-scale.

While the game will be hitting the Xbox One and PS4 in January, we still don’t have a PC release date. All we know on that front so far is that the PC version will land in 2018. 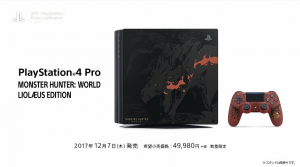 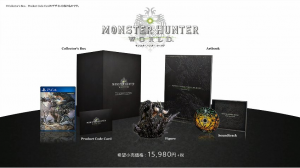 Aside from showing off more of the game, a Collector’s Edition for the game was shown, including the soundtrack, artbook, a statue and fancier packaging. A Monster Hunter themed PS4 Pro was also shown and it is quite nice. I particularly like the controller design.

KitGuru Says: I’ve played a few Monster Hunter games in the past and they have been excellent, though always held back by console frame rate caps. With this entry coming to series finally landing on PC, that hopefully won’t be a problem anymore. Are any of you looking forward to Monster Hunter: World? Which platform will you be getting it on?