This year as part of the Steam Autumn Sale, Valve is doing something a little different- they have launched ‘The Steam Awards. This awards ceremony not only allows Steam users to vote games into specific categories, but you can also nominate a category. As you might imagine, it hasn’t taken long for the community to create the ‘game that deserves a sequel’ award as a way of getting Valve’s attention and showing demand for Half-Life 3.

Valve’s official award categories for the Steam Awards are all fairly light-hearted and humorous. There technically isn’t an official ‘game that deserves a sequel’ award category but since the community can suggest a category and nominate a game for it, many are choosing to do so with Half-Life 2. 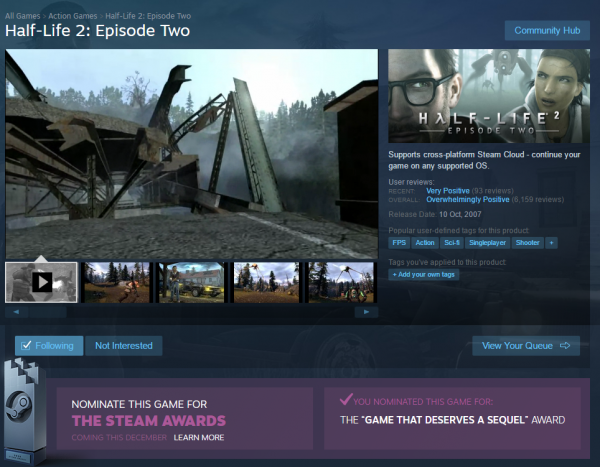 The community effort started out on the Half-Life subreddit and the ball seems to be rolling as the post has received well over 6000 upvotes and many commenters are expressing support for the movement. If you want to nominate a game for an award, all you need to do is head over to a game’s store page and go through the steps shown there. If you want to bug Valve about Half-Life 3, then you can head to the Half-Life 2: Episode Two page and enter the custom category “game that deserves a sequel”.

KitGuru Says: While it is fun to see the community get on Valve’s back about Half-Life 3, it is unlikely that Valve will end up making this community award official. Still, it might be good to show Valve that there is still demand for more Half-Life.

Previous No Man’s Sky is getting its first update in over two months
Next Intel’s unlocked Core i3 7350K confirmed, benchmark results leaked