PUBG took the number one spot on Steam over the weekend

It seems that Player Unknown’s Battlegrounds is only going to keep growing as over the weekend, the game managed to take the number one spot on Steam. For a long time now, Dota 2 has managed to retain the most concurrent players of any game on Steam but that changed this weekend, with PUBG overtaking it for the first time.

Just three weeks ago, PUBG surprised us by taking the number two spot on Steam’s player list, overtaking Counter Strike: Global Offensive. At its peak, PUBG managed to retain 876,849 players all at the same time, which incidentally took a toll on servers and caused issues for some players. By contrast, Dota 2 has 842,919 players at its peak two days ago. 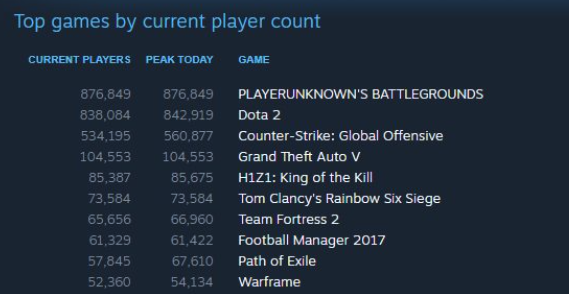 With Dota 2 being a highly rated free to play game, it almost seemed like nothing would be able to top it. However, despite its price tag, PUBG managed to do it. This comes off of the developers announcing that they had sold over 8 million copies, so clearly, the game’s player base is only going to get bigger.

The game will have the chance to rack up even more sales towards the end of this year too. Not only will it be leaving Early Access but it will also be launching on Xbox One, granting access to the console market.

KitGuru Says: PUBG is a fun game for sure, I tend to play at least a few rounds each weekend. Still, it amazes me how quickly this game took off.