Sim City is finally getting an Offline mode

Almost a year after its painful release, Sim City is finally getting an offline mode in the game's next update, developer Maxis has just announced. While an offline mode is much appreciated, it has raised an important question- How is it suddenly possible to have an offline mode now, when just less than a year ago we were consistently told that it was impossible? 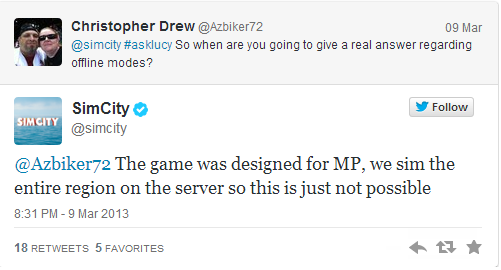 It's possible that both EA and Maxis were just being stubborn last year and wanted to prove that their always online restriction wasn't that bad but unfortunately gamers don't forget things so easily, I'm pretty sure everyone is a little curious as to why this is happening now when it supposedly couldn't a year ago.

Patrick Buechner, the general manager of the Maxis Emeryville studio, did give a statement regarding the announcement:

“Offline is coming as a free download with Update 10 to all SimCity players. When we launch it, all of your previously downloaded content will be available to you anytime, anywhere, without the need for an internet connection. We are in the late phases of wrapping up its development and while we want to get it into your hands as soon as possible, our priority is to make sure that it’s as polished as possible before we release it. So, until then… testing, testing and more testing.”

You listened? … Really? It's a little late don't you think?

While the offline mode is coming a little late, it will certainly help the modding scene as now mods can be kept separate from online games meaning the integrity of the multiplayer will remain intact.

KitGuru Says: Does it bug anyone else that they wrote free in big capital letters? The update is FREE- of course it is, you're the ones that screwed up, not the customers.