Sledgehammer Games co-founder, Glen Schofield, has spoken out about the recent Call of Duty: Advanced Warfare leak and he’s not particularly happy about it. The game was apparently stolen and then streamed live via Twitch, showing off a bunch of unannounced details ahead of the game’s official release next week.

The leak occurred yesterday afternoon when a user called Anfunny29 started streaming Advanced Warfare gameplay. Several Call of Duty YouTuber’s were quick to nab all the information and footage they could before the stream got shut down. One new feature that seems to be getting fans excited is the DNA Bomb, a new 30 killstreak reward that kills the enemy team and then leaves behind a green mist that spreads throughout the battlefield before disappearing. 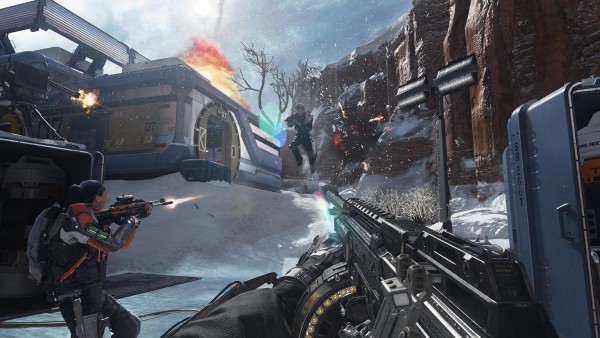 Players will also be able to turn on and off Paintball effects, a full list of weapon camouflage patters was also revealed. Video game leaks tend to happen from time to time but Glen Schofield was pretty disappointed, tweeting out “We took 3 years 2 make a game.Kept it quiet 4 the fans & it has to be stolen & leaked a week b4. That sucks. A real bummer. Thanks a lot.”

One follower suggested that the leak was needed as many potential buyers weren’t satisfied with the amount of information currently available. However, Schofield went on to say that the game must have been stolen at some point, saying that “stealing and releasing is not the answer”.

When people tried to make it out like the leak wasn’t a big deal, the Sledgehammer co-founder added that “It is a big deal to us because discovery while playing is part of the fun. It will all be good, just saying”.

KitGuru Says: It does seem a little unfair to take a hard working developer’s big moment away from them. A successful launch and subsequent discovery of all of the game’s new features would have garnered up a lot of praise and attention. While launch day may still go well for the team, a lot of the surprise has been taken out of it. That said, developers should pretty much expect leaks these days, there aren’t many surprises left in gaming or tech, unfortunately. What do you guys think? Do you care about leaks? Would you rather have every last bit of information prior to release?