Valve has now updated the Steam FAQ to clarify that Early Access games don’t necessarily have to be finished as some development teams may run in to problems that hinder them from finishing the game. Valve’s new advice to Early Access buyers is to only buy if you are excited about playing the game in its current state.

The Steam FAQ now answers the question: When will these (Early Access) games release?, with the following answer: “It’s up to the developer to determine when they are ready to ‘release’. Some developers have a concrete deadline in mind, while others will get a better sense as the development of the game progresses. You should be aware that some teams will be unable to ‘finish’ their game. So you should only buy an Early Access game if you are excited about playing it in its current state.” 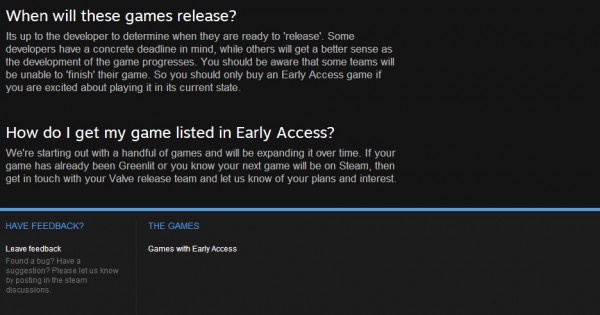 Early Access titles are starting to generate a negative stigma as some of the more popular titles sell hundreds of thousands of copies before even getting half way through development and sometimes before even adding basic features that gamers want or need.

However, not all early access developers are trying to con you, many of them are trustworthy, hard working and absolutely intend to finish their games but Valve’s lack of quality control allows some bad apples to spoil the bunch, which brings down the paid alpha scheme as a whole.

KitGuru Says: Steam’s current implementation of Early Access isn’t great and it’s causing a lot of negativity but some Early Access titles are already pretty good. I’ve personally played a lot of Prison Architect which has improved greatly over time. Maybe Valve just needs to do more to ensure that the developers behind some titles are actually up to  the task. What do you guys think? Should Valve implement better quality control? Have you played any Early Access titles?