Valve has announced that Steam has surpassed a couple of milestones alongside the launch of the store’s huge ‘Discovery’ update. Over the past nine months alone, 3700 titles have been added to Steam, 1300 of which were actually new games.

Additionally, the service now has 100 million active user accounts, proving that PC gaming is very much alive and constantly growing. So far, the new store page seems to be pretty well received, allowing users to select what they actually want to see and follow specific content curators so that you can finally avoid digging through all of the backlog titles that have been dumped on to the Steam front page over the last few months. 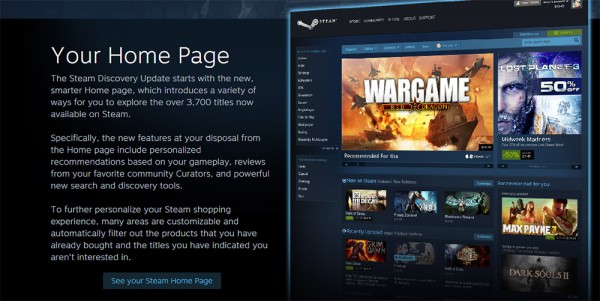 Other useful features from the new Steam update include being able to track specific games you are interested in, something that could be particularly useful for Early Access titles as it will allow prospective buyers to follow the game and its development up until its at a point where they would feel comfortable investing in it.

KitGuru Says: 100 million people actively use Steam and the number of PC gamers in the world will likely continue to grow. What do you guys think of the current state of PC gaming? Have you checked out the new Steam update yet?